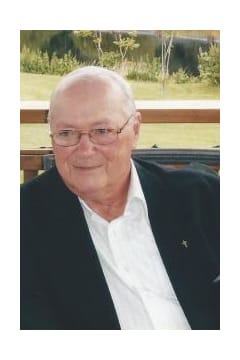 Age 80 of Louisdale, passed away surrounded by the love of his family on March 4, 2018. Born in Halifax, he was the son of the late Edward and Margaret (Muise) Bowden. Jack is survived by the love of his life, Jessie (Boudreau) Bowden; daugthers Margaret and Karen; sons Derek and Michael; grandchildren Mandy, Courtney, Jonathan, Ceilidh, Brody, and Alexa; great grandchildren Rhylan, Peyton and Harper; brothers Henry Jim, Joey and Danny; sisters Mary and Joan He was predeceased by his sisters Shirley and Linda, brothers Edward and Gerald.

To many, he will be remembered as the little old man standing on the side of the road waiting for one of his many angels to pick him up and take him to his beloved, where he would sit for hours, hand in hand for the last 9 years at St. Anne's Centre.

Our eternal thanks to the staff of the Strait Richmond Hospital who somehow managed to fade out the complete chaos of their ER into a space of love, compassion and comfort for our family’s last moments with our Dad.

Cremation has taken place under the direction of Donald K. Walker Funeral Directors Ltd. The family will receive friends on Friday, March 9th from 2-4 and 7-9pm in the Glenn Sampson Room, Louisdale.

Funeral Mass will be held at 11am on Saturday March 10th in St. Louis Roman Catholic Church, Louisdale with Father Joe MacKenzie and Deacon Daniel Bowden officiating. Burial will take place at a later date. In lieu of flowers, memorial donations may be made to Autism Nova Scotia, Strait Area.

Dearest cousins, Jessie, Margaret, Derek, Karen, Michael & All your Families & to Jacks brothers & sisters & their Families: Peter & I were very very saddened to hear of Jack passing. How lucky this world was to have such a loving, caring, dedicated & compassionate person like Jack. Life threw him many curves which would have made some run away, but not Jack. Jessie was so lucky to have him by her side for so many years during all her illnesses. His love for his family will never end. His memory will never end as every one of his children have his gifts. They will carry that on & pass it on to their families. We have you all in our thoughts & prayers for many days to come. Please give Jessie a big hug from us & tell her we will see her again this summer. Sending you all our love. R.I.P. Jack. We know you will still be holding Jessie’s hand daily as you have done for years. Love: Peter & Linda Samson Acton Ontario
- Linda Samson
Jessie and Family,someone so Special can never be forgotten.If you are ever feeling lonely,and feeling in despair,Remember we are Family and there is always someone there.Thinking and Praying for you with Love, Terry,Joan and Family
- Joan Butler
Jessie, Margaret, Karen, Derek, Michael and families. Our deepest sympathy on the loss of your Husband, Father and Grandfather. A kind soul will now rest in the arms of our Lord. His undeniable love for his family will forever be remembered. Take comfort in knowing all those who love you are praying for you. Love Lorne and Patsy
- Patsy Landry