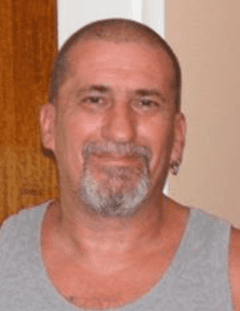 Michael George Rideout 1962-2019
With sadness in our hearts today we let you know that our adored Mike has passed away. Diagnosed with lung cancer this past December, he succumbed to the disease with family by his side on October 18, 2019.
Mike was the eldest of five children raised by the late Earl and Betty Rideout. Brought up in Arichat, Nova Scotia in a house on a hill overlooking the sea, his childhood years were carefree with all the unstructured freedom that comes with growing up surrounded by an extended family in a close-knit community. ‘Mickey’, as he was known as a child, was a fun-loving, happy boy who favored time with his friends, baseball and skating. As a teen, his lifelong interest in sports grew along with his vast appreciation for 70’s rock music.
Sometimes mischievous but always kind, Mickey always had a glint in his deep brown eyes. It was those eyes caught the attention Lisa Creelman and the two would build a life together in Truro, Nova Scotia. The apple of Mike’s eye was his daughter Chantel. Mike found his calling as a father and Chantel was his world.
He will be remembered for his modest nature, incredible work ethic, pride as a Dad and generosity of spirit.
Mike is cherished by his loving family, Lisa Creelman his partner in life; Chantel Rideout, daughter; siblings Jennifer Rideout (Ian Anderson) of Toronto, Marsha (Doug) MacPherson of Timberlea, Dominic Rideout (Tanya Johnson) of Truro, Dolly (Derek) Hollett of Sackville, Janice (Ivan) Galesic, of Barrie, Ontario; and his nieces and nephews Andrew, Lauren, Josh, Alex, Xander and Jessica; his aunts and uncles Howard (Halifax), Frank (Anne), Petit de Grat, and Edward (Brenda), Arichat; Meta (Bryce) Bruce, Boiestown, NB and Margaret (Cline) Bourinot, Port Hawkesbury. He was predeceased by his father Earl Rideout (2017) and mother Betty Rideout (2018). He will also be missed by his dear friends especially those closest including Doug and Barb Mason, Michael Roma and Carol Ann O’Brien.
Special thanks to the many doctors and staff at the Colchester East Hants Health Centre who cared for Mike. We are thankful for their skill and compassion.
A celebration of life will be announced at a later date.

We are so sorry for your great loss 🙁 Michael was such an amazing husband/father/brother he will be greatly missed by all. Goodbye big brother xoxo till we meet again. Love your little sister Janice xoxo
- Janice Galesic
So sorry to learn of Mikes passing, I got to know Mike and Lisa many years ago when i worked at Polymer with him. Mike was always known for his smile and keeping work fun, thoughts and prayers to mikes family.
- aaron tooker