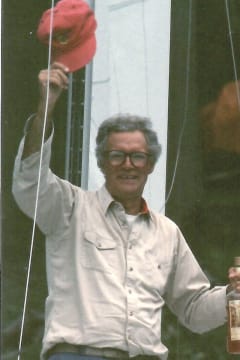 Age 85, of Bedford, N.S., and one of Canada's best-known yachtsmen, crossed the finish line in the race of his life, one which saw many firsts.

Proclaimed 'King of the Basin' in the 1960s by Nova Scotia's highly honoured Race Officer the late Tom Taylor - Barry or 'Snellie' as he was otherwise affectionately known, was one of the leading analytical and instinctively skilled racing skippers and crews in a generation of many great names to emerge under his mentorship from Bedford and Nova Scotia generally.

His reign over the waters saw many triumphs including: the Prince of Wales Trophy presented by Prince Philip the late Duke of Edinburgh; several Maritime Bluenose Championships, the US/Canada Eastern Division of the Mallory Cup, coaching the national sailing team and as well as a local team of Larry Creaser, Gavin Flynn and Eric Koppernaes to second place finish in the Etchells Worlds, and many many wins in provincial regattas lastly in Rush, (the 'sled')

In winter, when the bays and lakes froze, he became one of North America's foremost builders and racers of ice boats in the DN Class.

His strong suit was analysis - he observed and questioned what others perhaps took for granted. Winds, tides, sail shape, mast bend, hull resistance and countless other factors were at once the active ingredients in a mind striving ceaselessly to perfect high performance of a boat and its crew. And, as one might expect, he demanded excellence and more skill and commitment than most crew could deliver. But his drive to win, and win he often did, kept them very loyal and willing to put up with his unrelenting quest to win.

Thrifty to a fault, Snellie decreed that his friends and crew were expected to pay their own way, because with him every penny was a prisoner. And he held true to this rule by using his craftsman's skills to manufacture much of what he needed - from masts to sails. Oddly enough, his genius, evident in timing on the starting line and with the reactive elements of boat building with chemical compounds and catalysts did not extend to the mysteries of meal preparation. This culinary blind spot was filled by the sympathetic ministrations of those who took pity upon him, and kept him well fed with an ongoing supply of delicious meal.

His charm and beaming face effusively on display after the flush of yet another race course victory might have seemed almost magnanimous, but it came as the pure product of hard work and when necessary a gruff and demanding demeanour. It hid his soft heart that perhaps he did not wish to be taken as a weakness by his rivals on the race course. His daughter and son can recall his stories which reflected his fascination with nature's free showing of the mysteries of the natural world - thunder, lightning and wind. Even a fish swimming innocently beneath a wharf was material for a tale.

He was no stranger to quiet generosity. For years he anonymously funded sailing school tuition for disadvantaged kids. He was Rear Commodore (racing) of Bedford Basin Yacht Club and assisted in the development of the club facilities and services for many decades commencing in the 1960s.

Born on April 29th, 1937 in Campbellton, N.B., the second son of parents (deceased) Frederick William and Francis Emmeline (Campbell) Snell, he is survived by his son Gregor Campbell Snell and daughter Margaret Hilary Snell, and grandchild, Benjamin James Corkum all of Halifax or Bedford and niece Jaimie Snell of England. Barry was predeceased by his former wife and mother of his two children, Elizabeth Ann Buell (Fenwick), and his brother James F. Snell of Bedford, one of his many close sailing rivals.

Educated at Rothesay Collegiate, he went on to a successful career with NCR. It was then that he gave up his youthful fascination with a motor boat (Playboy) and water skiing to turn to serious sailboat racing in the 23-foot Bluenose Class (Hustler), something at which he immediately excelled and which led him naturally to a second career in yacht brokerage and chandlery. He excelled at darts and tennis.
Much more could be written of this departed sailor and to very good effect, and his friends (many of whom stepped in to assist him in his declining months and for which the family is truly grateful) will add their recollections and anecdotes on this website. So in keeping with Snellie's expressed wish, this formal obituary from his family must remain the soul of brevity so that others may also have their say.

For those wishing to do so, donations may be made in his name to either Bedford Basin Yacht Club or Bedford Baptist Church.

There will be an opportunity for all those who knew him to elaborate further on his life and times in person, both during and following a commemorative gathering to be held Labour Day Weekend, September the 4th at 5:00 pm at Bedford Basin Yacht Club where his ashes will be carried first over the club finish line and then committed to the currents and waves over which he ruled as 'King of the Basin'.