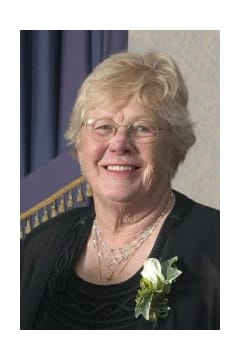 Barbara J. Near-Power, 85, Dartmouth, passed away peacefully June 3, 2019
surrounded by family and friends.
She was the youngest of three children of the late Reginald and Francis Siddle.
Also predeceased by husband Edward J Power, daughter Kim and grandson Keith. She
is survived by children Tom(Chris)Power, Debbie(Russel)Trueman,
Vicki(Wilfred)VanZeumeren, Wendy(Jules)Senecal, Shelley(Stephen)Power,
Rosalind(Winston)Croscup, Joe(Kim)Near, Derek(Rita)Near, Frank(Naomi)Power,
Lory(Bernadette)Near; 5 nieces and nephews; 16 Grandchildren; 19 Great
Grandchildren, and 1 great-great Grandchild. Also survived by siblings Marjorie
Barrett and Norman Siddle.
Besides, what she felt was her greatest accomplishment, her children, Barb was
also an accomplished 5-pin, 10 pin and candlepin bowler. In her earlier years
she took the Maritime Championship three years in a row, as well as many other
provincial championships. She was also proud that she bowled a perfect "5 pin"
game. She was involved in real estate for many years, both in sales and
investing.
Both Mom and Ted enjoyed spending time at their cottage in Queensland.
After retirement Mom and Ted spent the winters in the motorhome in
Florida and travelling throughout the states and Canada. She was a amazing
mother, wife, friend, sister and a source of wisdom for all of us. She had
touched so many lives and was well respected by all she met.

Celebration of life to take place at Port Wallace United Church, 263 Waverly Rd.
on Monday June 10th at 2 pm. Cremation has taken place under the direction of
Donald K Walker funeral home. In lieu of flowers, donations may be made to the
Dartmouth General Hospital Foundation, or a charity of your choice.

The family would like to thank the doctors and nurses at the Dartmouth General
Hospital, (4 east) and the "girls" from Northwood Homecare.
Online condolences can be sent to www.donaldkwalker.ca

I enjoyed very much also being one of the Northwood "girls". Barbara was an absolute pleasure to work with and always provided a good laugh. She is and will.continue to be missed. Another ANGEL was called home. May you now R.I.P.
- Gloria Groves
Our thoughts are with you Debbie, Russ & Pam & the rest of the Trueman family. We only had the pleasure of meeting Barb on one occasion. I know that you have so many wonderful memories to cherish to help you get through this difficult time. I am sorry to say that I won't be able to attend her ceremony but my thoughts will be with you.
- Natalie Edinger
Ah Barb... you taught me lots One of my role models... #strongwomen
- Deb hawkins
A wonderful lady,enjoyed our friendly chats at the bank.So very proud of you Debbie.Thinking of you.
- Janet Amirault
I had the great pleasure of being one of Barbara’s Northwood ‘girls’. She was a delight to be with and I will miss my time with her.
- Janet Thurrott