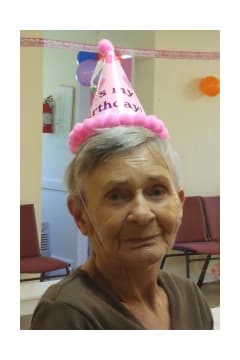 Beverley, Bev to most, was a strong willed, determined kind soul who passed away peacefully Oct 21, 2019 in Halifax Hospice.

At seven (7) years of age in 1945 there was an explosion at the Bedford Magazine. While on her way to the base to meet her uncle to watch a movie, she took a few minutes to speak with the guard standing point at the gate to the Jetty. She said her good-byes and seconds later all she can remember is a loud sound and waking up with black soot and hot embers dropping all around her. She was dazed and confused and started to walk back towards home, then turning to head to the base. She was picked up by a family in their car heading to the base for safety as their home had been destroyed. She had been lost/missing for three (3) days as her family only knew where she had been headed, but not reported as arriving.

Her Grandmother, Nell Roscoe, owned a lot of land of what is now known as Burnside Industrial Park, and had a store where she sold necessities to the Soldiers during the war. Her Mother, Helen Turple (Stevens), her Aunt Neve McGinley all had homes along the road which were badly damaged.
There is so much more to this story, and Mother had always wanted to write a book about it or have the local news do a story about it. We never did get around to making any of this happen. Sadly.

Bev had seniors care home in the basement of her home of Hammonds Plains, NS. She had multiple seniors over 10 years when she decided to close the home down as the number of hours it required started to become too much on her and her family. She hated to do this, but didn’t feel she had any other choice. She started a daycare after this during the day, and went to work during the odd evening and weekends as a Person Care Worker for Northwood.

Bev moved to Prince Edward Island in 2009 where her sister Barbara lived. She loved living on the island and became very active in a bowling league. This was a winter activity she looked forward to every Friday with the girls. During the summer, she would go golfing with her sister and friends, Marina, Brenda, Ann, Ena, Mary, Dorothy, Myrna, Heather, Thelma and Judy. While there she worked as a flyer carrier for the Guardian News Paper. Believe it or not – and most didn’t – but she would walk and deliver up to and sometimes more – 350 bundles of flyers. Her sister Barb would assist her sometimes; and her daughter Kim upon her move to the island also assisted her when the time allowed. For the most part – she did it all on her own. She took great pride in this job and the homeowners seen this and always rewarded her during the holidays with gifts of appreciation. She loved animals and during her deliveries she would pat the cats and dogs and always had treats to give them.

She belonged to the Cornwall Christian Church, of Cornwall, PEI and truly enjoyed every Sunday’s service with Pastor Mike Burns. He and his wife Jana were so kind to her and would visit her while she had short stays in hospital. They helped her re-kindle her faith and always spoke so fondly of them and their congregation. She made a great friend while attending church, Linda Jamieson, who always looked out for Mother. One thing Mother had wanted as a last wish, was to go to PEI to see Linda, Pastor Mike and the congregation. So, during the Thanksgiving long weekend, she, her daughter Kim and her grandson Geordan headed over for a couple of days. She was picked up for church by Linda and was able to attend a service and go out to lunch with Linda afterwards. She truly treasured this time.

In 2017, Bev moved back to Nova Scotia to be home with her family. Her daughter Kim- fiancée Chad, grandson Geordan Henwood (Scot Henwood ex-spouse), son Rob-spouse Betty, grandson Mathew-spouse Kari and great granddaughter, Breigh, Her health was getting gradually worse and she needed to be close to family and easy access to health care. She loved hanging out with her daughter and her fiancée’s friends, having laughs and dancing and just feeling young again.

We are all going to miss her, and remember her with the fondest of memories.

A private family and friends service to be held at her daughter’s home, date to be determined.; the Service will be presented by her brother in-law, Rev. Luuk Geerligs.

I am so sorry to hear of Bev’s passing. I enjoyed the times I came to the house to do her hair. She always made me laugh and had great stories to tell. She will be missed.
- Jennifer
Bev, or as I knew her “Momma” will forever be in my heart. Such a caring, loving, strong woman, whose laughter and quick wit will be so missed by so many.....I learned from you, I laughed with you, and so enjoyed the moments we shared. Saying you are a strong woman is really an understatement.....you had to prove nothing.....you believed in what you believed and fought for that belief! I know you are dancing and singing in Heaven and I know you will keep watch over us all. I know you knew Kim and Geordan will be looked after by your wonderful son-in-law.....I will look for your rainbow, dragonfly, cardinal, butterfly.....and the bright star you will shine for us all.....until we meet again! Words can not take away the pain we all feel right now.....but time will heal. I was saddened by the news of your passing, but I know you are finally, free of pain, suffering and able to breathe easy......Kim and Rob and your families.....keep your Mother close to your heart in memory, and know I am thinking of you all the time. Love and prayers, Heather Casey (AKA.....”Bestie”)
- Heather Casey