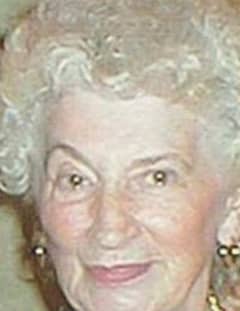 Frances Shirley (Doherty) Arnold had a skill few of us could imagine: she could gaze at a morning sunrise, capture that moment forever in her imagination, and transform it within hours into an oil painting
She would create a scene so real you felt you could walk from one dimension through to the other. And that’s just as mom did when she put down her brushes and was captured by the setting sky on Aug. 3, 2019, after a brief illness. She was 91, born in Melville Cove, the daughter of Dennis and Mary (Emberley) Doherty.
For a person with little formal education, she mastered more skills through self-teaching and determination (some might say stubbornness) than can be listed.
It sounds like a lyric from a Springsteen song, but she was raised on the rough streets of north-end Halifax, where she learned to throw rocks back at bullies and signal that if they wanted a fight, they had come to the right place. Frances worked at Birks on Barrington Street in Halifax, eventually meeting Gerald Arnold, who became the love of her life and her husband, and in Windsor Junction they made a home for Sandra (Jim Thomas, Fall River), Susan (Gregg Ross, Moncton), Gerry (Oakville, ON) and Dan (Windsor Junction).
And 72 years of marriage passed in a blink – a blur of Christmas tree hunts, Blue Jays seasons, loud Sunday dinners, and the usual family highs and lows.
Those years unfolded from unpaved roads and soot-belching steam engines to the digital era, bringing an impressive array of grandchildren and great-grandchildren with educations, big dreams and their Nana’s talents and passion for life.
As noted, she was a remarkable artist with a visual gift for interpreting her world. Later in her life, some of her work became available through charity sales and auctions; she got a great kick out of the fact that people would pay for her art.
As a baker, she may have been without a local peer. Brownies, cakes, chocolate chip squares and cookies and tea biscuits populated a highlight reel of her family’s favourites for occasions, or more lately, just because grandchildren were visiting.
But perhaps her most coveted talent was her green thumb; she grew gardens of colourful wildflowers and fragile, finicky species that required constant love and attention. Her encyclopedic knowledge of each variety rivaled master groundskeepers. She loved visiting Halifax’s Public Gardens (and secretly comparing her flowerbeds and prowess to those of the professionals!)
She was an avid fisher and enjoyed weekend getaways to harass the trout population in the province’s eastern regions, always returning with more stories and laughter than fish. She wrote poems and talked to the birds and entered many CBC Radio contests, occasionally winning, to her great delight.
She loved to bowl and was quite good. As her children grew, she rarely missed their sporting events, particularly hockey; in the tight confines of East Hants Memorial Arena, her voice was hard to miss.
She was a longtime member of St Rose of Lima parish and served on the parish council and sang in the choir until she was no longer able. She dabbled in other music too – guitar, accordion, even her father’s old tuba that came out of its case from time to time, mostly to amuse grandchildren with its larger-than-life sound. She was a long-time volunteer at the Cobequid Centre’s foot clinic.
She was a community activist long before that term was invented, campaigning for athletic fields and music programs for schools, signing up ratepayers door to door to get streetlights, and playing a foundational role in the formation of the Tri-Village minor hockey program.
She even wrote a history of Windsor Junction that is on file in the Nova Scotia Archives. A prowler of flea markets, she loved finding things to send to her grandchildren, whose homes in perpetuity will be adorned with “Nana things.”
Lest anyone think she was good at everything, Nana was never a comfortable driver (nor were we comfortable passengers). But as it was with so many things, she did it because it had to get done.
In conversations about the recent commemoration of the 50th anniversary of the moon landing, it was remarked that over her life, she had witnessed technological innovation of staggering complexity. She waved her hand dismissively: never mind moonwalkers or cloud computing; to her, civilization’s greatest achievement was to bring central water to Windsor Junction and her doorstep. There was no debate.
There were contradictions, no doubt. It is probably worth noting that she could, if need be, curse in a manner that would cause a stevedore to curl up in a ball and reconsider his life choices. This same woman, upon seeing the Rockies for the first time in 1993, cried openly at their beauty.
In addition to her immediate family, she is survived by a brother, Joseph (Hilda, Beaver Bank, NS), and a sister Denise (Eric Patrick, Kelowna, BC). She was predeceased by a sister Joan Featherstone and a brother Dennis.
She is survived by grandchildren Drew Arnold (Nadine Archibald, Truro), Devin Thomas (Leah Oickle, Dartmouth), Amber Thomas (Frank Johnson, Dartmouth), Dr. G. Mac Ross (Lyndsay, London, ON), Jared Ross (Katherine Cole, Moncton, NB), Patrick Arnold (Jenelle Storey, Beeton, ON), and Christopher Arnold (Oakville, ON.) as well as great-grandchildren Sofia and Ava Arnold, Finnegan Ross and Maxwell Thomas.
In keeping with her wishes, cremation has taken place. A funeral mass will be held at 10 am on Friday, August 9 at St. Rose of Lima Parish in Fall River, Father Michael Walsh officiating. Family flowers only please; however, in lieu of flowers, donations to the Cobequid Centre or a charity of one’s choice, would be appreciated by the family.

So sorry for your loss. Your Mother has left some wonderful memories and traditions for your families. Please accept our deepest sympathies. Dan and Patty
- Patty Cole
Gerry and Family - Thinking of Mrs. Arnold, a word comes to mind - presence. She had it in abundance. Smarts, wit, energy, and determination. As a friend of Gerry’s I sometimes found myself in her kitchen. Her fresh baked goods often came with advice attached - she would genuinely engage in conversation. I have been the beneficiary of Mrs. Arnold’s initiatives - her plants, paintings that Gerry and I hung in our first bachelor pad, Tri-Village Hockey, city water in Windsor Junction. She made a difference in her community! A great lady. She will be missed. With sincere sympathy for your loss. Hugh and Debbie McIsaac
- Debbie McIsaac
Gerald and family- Sorry to here of Fran’s passing . I always knew she was a special lady and the obituary told me even more . I enjoyed our chats , whether in church or the grocery store . She told it like it was , loved her sense of humour! She will be missed but cherish the memories. Karen Lovett (White)
- Karen
So sorry for your loss...I knew your mother was a remarkable woman but didn’t know how remarkable till I read the obituary!!! What an amazing person. You will have lots of memories to pass along to the new generation coming up!! It’s hard to lose your mother no matter how old....it leaves a big hole in your heart!
- Sandra Delaney
Gerald, sorry to hear of your loss. You and Frances had many great years after you pulled the plug at the Yard. Ralph
- Ralph MacDonald
Dear Sue, Greg & family - So very sorry for your loss. I know you have wonderful memories of your mother that will always be in your heart. She made a lasting impression in my mind when I met her 32 years ago as I'm sure she did with all who had the pleasure to meet her. Sending deepest sympathy from Bernie & myself
- Nancy Boudreau
Sue and family... so sorry to read of the passing of your mother. May your wonderful memories bring comfort to you and your family. Wanda & Bruno Deveau
- Wanda Deveau