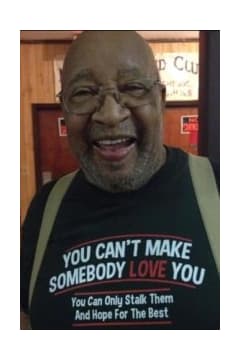 Gabriel, Aubrey C, 87, passed away peacefully on March 29, 2020 at Camp Hill Long Term Care Facility, Halifax. Gabe served in Korea, Germany and other posts while he was a member of the military. He was a chef for Via Rail and applied himself to various jobs after he left the Army. He played darts at the Newfoundland Club until he was 86, played pool at Dooly’s with his grandson, was a member of RC Legion, Centennial Branch and the Army, Navy, Air Force Club for many years. He loved to play Bingo and everyone who came across him in life wanted to see what funny saying was on his T-shirt.

Had the pleasure of working with Aubrey onboard the train when I first started & remembered his kind, gentle & smiling nature. Remet Aubrey at the Via Pensioners meetings & enjoyed his comments and humour. Heartfelt condolences to Dorothy, and all of the family members, from Dexter Conrad and myself, Stella-Marie Sirois. Our thoughts and prayers are with you all. Rest in Peace, cher Aubrey.
- Stella M Sirois
I am very sorry for your loss, Aubrey was a friend of my late father Leo Gargan, they were both in the Army and friends. We lived in Windsor Park at the same time, and Dad and Aubrey remained friends in the later years. Please accept our heartfelt condolences from the Gargan family at this sad and difficult time. Hugs to you all.
- Christine Gargan
Remember Aubrey when we were kids living in Springhill. One memory was Aubrey and I going to the woods in Springhill, me with about 20 shotgun shells from my dad's supply with a plan to explode them on the side of a hill in a bon fire. Lucky we escaped uninjured to go on and live another day . I have never saw or heard from Aubrey since those childhood days and often wondered what he did with his life and read with great interest about his life and the fact we both lived here in Dartmouth. Rest In Peace Aub.
- Carl Chapman
I met Aubrey back in the mid 90's. He was a customer of mine, and the very best kind. I never forgot him.He was the kindest and most sincere man I ever met. And always had a smile. RIP Aubrey
- Sean Walsh
oh ya ,worked a couple of yrs with AUBREY ,we were friends ,Sooo kind & funny , one of the BEST !! R.I P.,my good friend !!
- bernie plummer