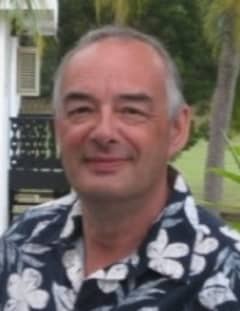 If love is patient and kind, George Bell was amongst the most loving of men.

On May 18, 2019, George went home to be with the Lord he loved, at the age of 67. He approached dying as he did every other aspect of his life, with acceptance, gratitude, and unwavering faith.

George was the eldest son of Anne (Harris) and the late Sheldon Bell, who lovingly raised George and his seven siblings, Donna Lynn, Joanne (Graham), Pamela (Bruce), Stephen (Diana), Valerie (Larry), Robert (Ieva), and Christopher (Chelsea), in Halifax, NS. George enjoyed being an uncle to his many nieces, nephews, and their families.

He met the love of his life, Mary (Poplar), in 1974. They married two years later and George spent the next 42 years loving Mary unconditionally. George was a selfless, devoted husband and Mary a supportive, caring wife. They brought out the best in each other, and in their two cherished sons, Anthony (Jillian) and Timothy (Gemma). George was a gentle, kind, compassionate man, and instilled these same characteristics in his sons.

George had a gift for serving others, which was evident in his work with Northwood Homecare and in his contributions to his church, The Fall River Chapel. George could often be found rocking babies at the back of the church and they seemed to sense that they were safe and loved in his arms. He was overjoyed when he eventually welcomed two granddaughters of his own (Hannah and Alice). George and Mary also spent much of their free time together searching for lost dogs and were so joyful to see them reunited with their families.

Above all else, George loved his God with all his heart and soul and looked forward to going to Heaven to be with his Lord, family and friends who had gone before him.

The family would like to offer special thanks to all who cared for and comforted George over the past three months, particularly Barb Stewart (Community Consult Nurse with Palliative Care) and Janet Stuart (Mary’s sister).

A Celebration of Life will take place at Grace Chapel (255 Ross Street, Halifax) on May 31, 2019 at 11:00 am. Donations can be made, in lieu of flowers, to Litters ‘n Critters Rescue Society or Malagash Bible Camp.

Sending my condolences to the family. I worked with George at Northwood Homecare. He was very kind. You are in my prayers. God Bless. -Beverly Dixon-Davis
- na
My condolences to the entire Bell family. from Shelagh Skerry, your former neighbour from Stonehaven Rd.
- Shelagh Skerry
So sorry to hear of your loss, our condolences to your family from Murray Harbour friends to family members.
- Winston Birch
Mary, I am so sorry to hear of your George's passing. I know that he meant everything to you, as well as your boys,and I wanted you to know that I am thinking of you and your family at this time. Love to you all....Anne
- Anne Edmonds
Thoughts and prayers for you Ann and family♥️
- Dawn Stewart
It feels like George and his family have been neighbours of our family forever. I will always remember George being ready, willing and able to help out the Harpers next door. The Bells have been and will always be the best neighbours anyone could hope for and George's gentle caring presence will be greatly missed. I would like to offer the most heartfelt and sincere condolences to Mary, Anthony and Tim.
- Jennifer