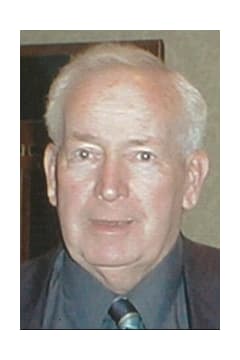 We called him Grump.
The name had little to do with his disposition, although more than once in his 95 years it would have fit comfortably when the Blue Jays booted a double play. But no, the name came from his first grandson, who, as a toddler, was unable to master the phonetic confluence of the letters G and R and A, and instead of Grampy or Grampa he became, once and forever, Grump.
Gerald Francis Arnold ended his lengthy retirement from Her Majesty’s Dockyards on December 3 after a little better than a week in hospital. Dad was born July 26, 1924, on what his mother steadfastly claimed was the hottest day that ever was in Kentville, NS. His parents were Joseph and Bertha Arnold, and he was the eldest and last surviving member of that family.
We could list the things written on a hospital chart that were left to tell people in scrubs and lab coats what finally took him that day. But let’s go with a broken heart, which has the advantage of being wildly romantic (which he would hate) and pretty much true, which he would not argue with.
When Frances Shirley Doherty Arnold died in August, Dad dimmed considerably, and after 72 years as a matched set, it’s not hard to understand why. Those of us who knew him best remember him not for the brief slide of the last four months, but rather the figure he was in our lives for decades.
A machinist in the dockyard for more than 40 years, he retired in 1980 as shop foreman. A passionate sportsman, he played softball, hunted, fished, golfed and was a champion bowler. He encouraged his kids to play and compete and learn. He wanted us to be generous, loyal, studious, honest, and successful, and to give back.
He coached minor and junior C hockey, and had a voice that could loosen the beams in East Hants Memorial Arena. He coached teenagers in hockey and ball who would not have had a chance to play had he not stepped up as a non-parent coach.
When he met our mother and married in the years after the war, they didn’t have much and they settled in Windsor Junction, where they could afford a small house in a quiet village with dirt roads and party-line phones.
Four children – Sandra (James Thomas, Fall River, N.S.), Susan (Gregg Ross, Moncton, N.B.), Gerry (Oakville, Ont.), and Dan (Windsor Junction) followed. Dad loved to tell the story about the night Sandra arrived: the Halifax Atlantics won the Canadian major senior hockey championship and he was the only male within 100 miles of the Halifax Forum to miss the game.
No matter. He got to see more than his fair share of championships up close in future years, and more than six decades later, he’d get to sit in that same forum and watch a grandson play for Dalhousie University.
He was blessed with gifted hands and an artist’s eye, which brought precision to most everything he did, whether he was in the dockyard machining a new part for a submarine or at home making a custom frame for one of Fran’s paintings.
He played an important role in the design and lathing of the Saint Mary’s University ceremonial mace – a gift in 1980 from Maritime Command in Halifax to the university in honour of SMU alumni lost in the service of Canada, and to honour alumni in the Forces today. Decades later, Grump watched proudly as grandson Mac Ross defended his masters thesis at Saint Mary’s – followed by a personal tour and viewing of the mace led by the school’s president.
Dad was what people today would call a control freak. He was happiest when those he loved were thriving and succeeding, but he would have liked it better if they could have arranged to always thrive and succeed close to Windsor Junction.
He loved a great dirty joke, lemon meringue pie, getting a new car every two years, Christmas and the annual tree hunt, and the Toronto Blue Jays. A voracious reader, he would read a book every day or two.
And he loved dogs. There are so many dogs buried in the woods behind our house Stephen King might find inspiration there.
In addition to his wife, he was predeceased by his parents and siblings Kathleen (Kaye), Doreen, Bradford, Joseph, and Bertha in childbirth.
In addition to his children, he is survived by grandchildren Drew Arnold (Nadine), Truro; Devin Thomas (Leah Oickle), Dartmouth; Amber Thomas (Frank Johnson), Dartmouth; Dr. G. Mac Ross (Lyndsay), London, Ont.; Jared Ross (Katherine Cole), Moncton, N.B.; Patrick Arnold (Jenelle Storey), Beeton, Ont.; and Christopher Arnold, Oakville, Ont.; as well as great-grandchildren, Sofia and Ava Arnold, Finnegan Ross and Maxwell Thomas.
In keeping with his wishes, cremation has taken place. A funeral mass will be held at 11 am on Monday, December 16 at St. Rose of Lima Parish in Fall River, Father Michael Walsh officiating. Family flowers only please; however, in lieu of flowers, donations to the Cobequid Centre Emergency Department or a charity of one’s choice would be appreciated by the family.

Your Dad and mine were friends as teens. Your Dad was truly a generous man. I am sorry for your loss. After reading his obituary it is clear your parents left a strong loving bond amongst you all that will serve you well through the generations.
- Beryl Mason
I'm sorry to hear your Mum and Dad have passed this year. That would be very trying. The obit is well written and uplifting because you are describing one who loved his life and shared his love with so many, by the sound of it. Take care. My thoughts are with you. I am a good listener if you want to call.
- Muriel Hogan