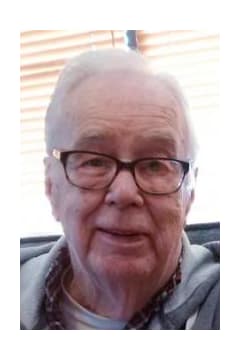 Born in Sydney, he was the son of the late John and Gertrude (Ingram) MacKeigan.

Hubert was a member of First United Church, Sydney and was employed at Air Canada for 35 years.

Upon his retirement, he busied himself with "cup of tea" handy man jobs for neighbours, relatives and friends, was a member of the Kiwanis Golden "K" Club and delivered meals on wheels.

Poppy always had time for his grandchildren, nieces, nephews and neighbourhood children, entertaining them with cowboy stories and 8-track music in his barn and backyard gazebo.

In 2011, he was predeceased by his wife of 61 years, Dorothy Bernetta MacKeigan (Dunford).

Hubert was also predeceased by his brothers, Eion, Earl, Don, Gerald (the late Ann), Alfred (the late Christine) and James; and sisters, Betty (the late Bob) Ballyntine and Margret Henry.

Family and friends are invited to a reception for a Celebration of Life at Sydney Memorial Chapel, 49 Welton St. on Saturday, June 22, 2019 from 12 -2 p.m.

Please share a condolence, photo or memory of Hubert "Huble". We welcome all condolences that are positive and uplifting that will help family and friends heal.