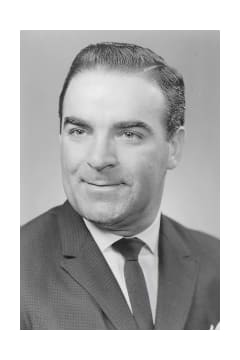 FOREST, J.A. Norman -- It is with heartfelt sadness that we announce the passing of a very caring gentleman, husband, father, brother, uncle and “Nor” to Matthew. He died as he lived, very quietly. Born on the Magdalen Islands, Que., he was a son of the late Joseph A. and Elioza (Bouffard) Forest. He retired from the Halifax Fire Department after more than 30 years service. Prior to becoming a firefighter, he worked at the Hotel Nova Scotian, British Colonial in Nassau, Bahamas, and Manoir Richelieu in Quebec. He also worked at Dugger’s Menswear for many years. Norman was a former parishioner at St. Theresa’s Church for more than 45 years, a member of the parish council, management committee and usher. He was a former member of the Waegwoltic, and Brightwood and Ashburn golf clubs. He was a life member of Knights of Columbus 1097. In 2015 he was recognized for 25 years of service as a volunteer chapel escort at Camp Hill hospital and he was recognized in 2009 by Halifax Regional Municipality for his volunteer work. He is survived by his loving wife of 56 years, Shirley; son and pal Stephen (Nikki), Halifax; adored grandson, Matthew, Halifax; brothers Archie (Jean), Beaumont, Alta.; Bernie (Leona), Middle Sackville; George, Halifax; sisters Carmen Matte (Bedford); Simone Tainsh (Abbotsford, B.C.); and many nieces and nephews. He was predeceased by brothers Joseph and Paul, and sister Lucille Regimbald. Cremation has taken place. Funeral mass to be held Friday, Dec. 14, 10 a.m. at St. Agnes Church, Mumford Road, Halifax. Reception to follow, 11 a.m. to 1 p.m. at Ashburn Golf Club, Joseph Howe Drive, Halifax. Family flowers only. Internment at a later date. Donations in Norm’s memory can be made to Hospice Halifax.

Shirley, just learned of your Husband's passing. So very sorry to hear this. My deepest sympathy to you, Stephen and family. Judy (Art & Marie Paris' daughter - Beech St.)
- Judy Powers
So sorry to hear of Normie’s passing. Soupie always enjoyed meeting with you and Norm at the Shopping Centre and we will miss our visits to the Casino. Take care and my thoughts and prayers are with you and Stephen.
- Patricia kelly
Shirley - very saddened to hear of Norm's passing - out thoughts are with you. Take care - Gordon Roche and Family
- Gordon Roche
Dear Shirley and Stephen, My sincere condolences on the passing of Norman. I'll always remember him as a fine gentleman. I'll not forget his invitation to skate at Centennial arena that often came at this time of the year.
- Dan O'Brien
Dear Shirley, Stephen and Family, our deepest sympathy on the loss of Norm. You are in our thoughts and hearts at this difficult time. Take care.....Sincerely, Shirley MacDonald, brother Bucky and Family
- Cyndi Swales
Steve, Nikki and Matthew, My condolences on the passing of your father, father-in-law and grandfather Nor. It is sad to think of being without him, I know. My sincere sympathy to your family. Glen Flemming (Andrew's Mom)
- Glen Flemming
Dear Shirley and Stephen, I was so sorry to hear about Norm's passing. He was always so friendly to my family and was such a good friend to Dad. May he rest in peace.
- Laila Rockman
Dear Stephen and Shirley Please accept our heartfelt sympathies on the loss of your loved one. Very sad time. Christina Creelman and Brian Devitt
- Christina
Our thoughts and prayers are with the family.
- Gerald Mcnamara
My heartfelt condolences to Shirley,Steve and family. Norman was an early mentor of mine in the clothing business and I have many good memories of that time spent with him. Rest in peace Bubba. Jeff at duggers.
- Jeff piccott
Our prayers and thoughts are with you and your family.
- Claire Werth
So sadden to hear of Normie’s passing! Sending my sympathy to you and your family, as always Lynn
- Lynn Dowe
Dear Shirley, Stephen, and family, it is with heartfelt sympathy that I pass along my condolences on Norm's passing. "Mr. Forest" as he was always known to me as a kid growing will always be remembered as a fixture on Poplar Street sitting in his chair on the front porch keeping watch over the neighborhood.
- Pat O'Neill
Shirley, I was saddened to hear of Norm's passing. Sending my condolences and love to you. Chris
- Chris Cameron