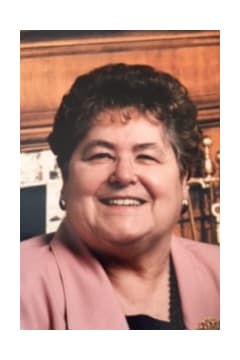 Jean Cecilia Veronica (Doyle) Nuttall, age 83, of Lower Sackville, NS passed away peacefully February 22, 2019 at the Victoria General Hospital after a lengthy illness.
Jean was a daughter of the late Henry Granton Doyle and Mary Elizabeth (Blackburn) Doyle. Jean was born and raised in Halifax, NS.
Jean married Howard Gordon Nuttall in1952 in Halifax and it was through her marriage to Howard that she was able to indulge her love of travelling.
Jean is survived by her husband of 66 years, Howard Gordon, her five children, Sandra (Alexander/Sandy) Colville of Northport, NS, Steven (Catherine) Nuttall of Calgary, AB, Michael Nuttall of Lower Sackville,NS, Beverly Holmes of Halifax, NS and William (Karen Oatway) Nuttall, of Lower Sackville, NS; ten grandchildren, seven greatgrandchildren, her brother Patrick Doyle of Halifax, NS, sisters Mary Lahey of Dartmouth, NS, Heather (Steven) Mitchell of Dartmouth, NS and many nieces and nephews.
As well as her parents, Jean was predeceased by her brother George Doyle and her infant grandson Robert Douglas Wellwood.
Jean enjoyed the challenge of crossword puzzles and the thrill of scratch tickets. She thoroughly loved going for drives especially if there would be a meal along the way.
Jean was a gentle lady who enjoyed the simple things in life. In keeping with Jean’s way of never wanting to make a fuss there will be a private family service at a later date.
Cremation has taken place under the direction of Donald K. Walker. Online condolences can be made at www.donaldwalker.ca. If you wish, donations can be made to the Heart and Stroke foundation or a charity of your choice.

Howie, I just learned of your wife's passing. My condolences to you and your family.
- Mike Whynot
Sandra and family, so sorry for loss our thoughts are with you during these difficult times, cherish the memories you have of your mother as they will be a comfort to you in the days and years to come. Paul and Bonnie
- Bonnie & Paul
To the Nuttall family, so sorry to hear the passing of your loved one. We met Mrs Nuttall when my mom Alice Williams was in the hospital. My husband and I just visited with her just only a few weeks ago. I am thankful that my husband and I had another opportunity to visit with her. Though I did not know her for a long time, I will never forget her for she had the most beautiful smile and sparkling eyes ever. Hold tight to the memories and we will keep you all in our prayers. Love Betty (Williams)Forman & Ralph whom Mrs Nuttall called “Bob” and her room mate Alice Williams.
- Betty Forman
Dear Sandra and family, Al and I met Jean at a family celebration a while back and I remember thinking such a pleasant, soft spoken lady, eyes that sparkled with kindness and genuine interest as we shook hands. And there are those eyes and that smile in her portrait. A lovely lady. Certainly, Jean will be missed. Please accept our prayers and thoughts. May you have comfort from all the good times and memories. Al and Maureen
- Maureen
Our very sincere condolences. Treasure the good memories that you have. Love Linda and Dale
- Linda and Dale