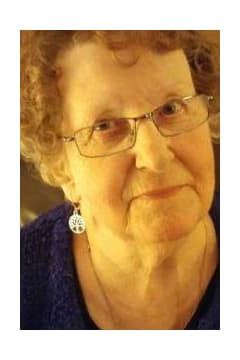 – Eastern Passage. On Tuesday, July 31, 2019, with her daughters and family around her, Mary left this world to join her Father in Heaven. Born in Halifax on September 17, 1941, Mary was the daughter of the late Leonard and Sylvia (Kenny) Rudolph and grew up in Halifax. She loved where she lived and except for her time spent in Canada’s Artic, lived in Nova Scotia her entire life. She started her working carer at The Book Room in Halifax at age 16 and would work in the oilfield industry and the Federal Government. When asked what she did for the government her normal response was “You don’t want me to call you.” Those that knew her, were well aware of her sharp tongue and clever whit. They also would have known of her love for her family.
Mary is survived by “her girls”, daughters Deborrah-Lin (Doug) Banfield, Crystal-Lee (Nathan) Pearson and Dawn-Lea (Kent) Greer; grandchildren Tanya-Mae (Louis) Hopper, Doug (Tami) Banfield, Nic (Yasmine DePaz) Banfield, Jon (Simone) Banfield, Aiden (Alexis Keirstead) Geizer, Autumn-Lea Geizer, Aiden Pearson, Madisson Perkins, and great grandchildren Louis Jr. & Bryce. Charlotte, Maddie, Gavin and Hanson.
Mary, who was known by Mum, Nan, GG and “old lady” by those who loved her, had an amazing life that took her from Halifax to as far west as Winnipeg, as far south as Florida and as far North as the Artic.
At age 18 Mary met and married Howard Dove. Together they began a great adventure. During this time Mums first daughter Lin was born. Mum lived in Port Harrison that is now called Inuksuk. Mum helped out at the Hudson Bay Store. She also helped out at the local school & church and hospital nurses. Mary meals were made by her and this was where she learnt to make homemade bread and bannock. The Inuit language became a part of her daily routine, with a bit of French added in the day. Mum would also let Lin know when a good book or favorite record of hers came in, which she Lin would charge to the account. Mum said she could, so it happened more than once.
During this time she learnt many of her trademark recipes and this would continue throughout the years. She taught us the joy of making and sharing a meal with those you love. We have all had some of her homemade dishes that she loved to make and share. Mary had a love of giving to others. One of her favourite past times was to crotchet. She had a love for crocheting. Mary made many blankets for her children; grandchildren and great grandchildren. Many outside of the family have comforted their new child with the handy work of Mary. She had a love for mothers and their children. She often donated her work to the IWK Hospital and SHYM a safe place for young pregnant women.
As with many, life faces challenges and strife. Mary was no stranger to this however never gave up fighting for a happier and better life. After her marriage to Lin’s father was over she met and married Gerald Geizer and had two daughters, Crystal-Lee and Dawn-Lea. The hyphens became a family tradition because of Mary’s creative mind. Although this would be a marriage that would not succeed, Mary never gave up, and continued to fight for what was best for her girls.
Mary was a loving mother to her daughters. She may have been sharp tongued and would call things as she saw them, she was always there for them. It was well known that Mum would not hold her tongue if she didn’t agree with what was said. It became expected from her and although it may have stung there was love behind it. Her quick wit and sharp tongue will be forever remembered and carried on with her family.
Throughout her life Mary became closer and closer to God and His love for her. When able, she loved to attend church and as a child sung in the choir at her church. Hearing songs of worship gave her great comfort. These last few years, though Mary physically was unable to attend church on a regular basis, she certainly expressed her love for God. The sacraments of the church were important to her. It seems serendipitous that she took her last breathes while receiving her Last Rites. She left this world to be with Her Father while her family were in prayer with her.
Mary had a competitive edge when it came to card playing. You never knew what cards she was holding in her hand but you can bet she came to the table with her game face on. It didn’t matter whether she played crib, bridge or some of the games she learnt over the years live Devils Nightmare or Euchre, she came to win. It was a strength she taught her children and those she loved.
She found peace being by the water, which lead her to retire in Eastern Passage. She had a love for going for drives along the oceans edge in Lawrencetown and loved being able to see the water from her door step. She never swam, but the sound and power of the water gave her strength and comfort.
Although we are sadden for our loss of a great woman, we find comfort knowing she is now in Heaven. Sleeping Beauty has found her wings. We will learn to live without her. But know she is with us always.
Memorial service to be held August 15, 2019, 2 pm at St Peter’s Anglican Church, Eastern Passage. Reception to follow in the church hall. The family would ask that in lieu of flowers, a donation be made to SHYM or Feed Nova Scotia in her memory.

My condolences to Crystal, Nathan, Aiden P (& Crystal's Mom's whole Family.) Mom's are precious to us & we pray God's Peace & Comfort, as you adjust to being without Mary's physical presence. Love, Luella Crosby
- Luella Crosby
Deborrah Lin & family. Many memories of your mom at her parents place in Sackville, and of you especially. It's not easy to let go of our moms. Our hearts help us to live around the missing her. My thoughts are with you and yours. Ed & Debby Cooke-Kellner Newport, NS
- Debby Kellner
Mary and I worked together many years ago. I enjoyed working with her. She had a great sense of humour, loved her family and was always willing to help anyone Sorry for you loss
- Debby Chipman
We were sorry to hear of your mom’s passing. Our condolences, Dawn-Lea and family. What a beautiful Eulogy of her leagacy.
- Pam Olejnik
My condolences to the family. Shared Christmas with Mary and Crystal. Mary was a kind lady made the best apple pie around. she will be missed by all friends.
- Deanna Hemeon