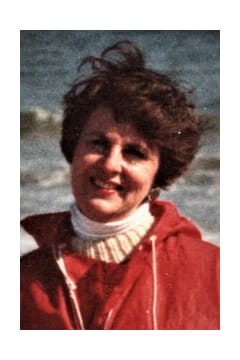 Maureen Lea Shaw: Age 84 years, of Halifax, N.S. died peacefully on April 2, 2019 surrounded by her family. Born in Winnipeg, Manitoba to the late Camilla (Dooley) and Louis Bichon, Maureen was the oldest of nine children. When she was an infant her family moved to Kenora, Ontario where she met and married her high school sweetheart, Mervin Shaw. They married in 1958 and moved to Halifax where they raised their five children. Maureen was a warm and welcoming individual known for her effortless conversation and her ability to make people feel at ease. A good listener, interested in people and helping others, her door was always open to family and friends who sought her out for her good advice and common sense. Maureen had a marvelous sense of style and an energy about her that one could not help but notice. She enjoyed nature, books and music, and encouraged these interests in her children and grandchildren. Beach combing with Grammie for shells and rocks on Big Island will always be a fond memory. She loved occasions and made them special; often she did this by organizing neighbourhood Halloween, Christmas carolling, cookie decorating and skating parties. As an excellent cook, she also liked to make traditional family recipes to celebrate these occasions.

Donations may be made to the Alzheimer’s Society of Nova Scotia. As well, we would like to thank the staff at Arborstone Enhanced Care—Tammi, Carol-Ann and Roselyn, to name a few—for their kindness and help during our mother’s stay there.

Celebration of life will be held at St. Thomas Aquinas church, Oxford Street, at 2 p.m. on April 11, 2019. Online condolences can be made at www.donaldkwalker.ca

Our sincere condolences on the passing of Maureen. Ray and Jan Mills and family
- Ray Mills
Dr. Shaw and the Shaw ‘kids’, I am sorry to hear about Mrs. Shaw’s passing. So many good memories of family fun years ago. She was beautiful, inside and out. Libby Brown
- Libby Brown
Merv, I was sorry not to be able to attend the celebration of Maureen's life. My sympathy to you and your family.
- Enid Shaw
Dear Pat, I am so very sorry for your loss. May the years of wonderful memories of your mom bring you comfort as you move forward. Take care.
- Suzanne Boylan
My thoughts have been with all of you so often. I send my deepest and most heartfelt condolences. During my visits with Vedat, I truly enjoyed so many moments that I shared with Maureen. We both loved her very much. Love & peace to you all.
- Margaret Baydar
Dear Merv and family We want to express deepest sympathies to you and all the family on the passing of Maureen. Your caring and concern for her long term was commendable. Kìndest regards, Jim and Linda Smith
- Linda Smith
My deepest condolences to the Shaw family. Any time I met your Mom over the years her brightness and sparkle left an impression, along with her beautiful smile. May she rest in peace.
- Catherine Reader
Merv and Family Since I learned of Maureen's passing, my thoughts have been filled with the many years of happy memories we have shared. She was a good friend. May love and memories of Maureen be with all the family at this difficult time. Ginny Phillips
- Ginny Phillips
To Patricia, your immediate family and all of the extended family we want to send along our deepest sympathies and consoling thoughts at such a difficult time.
- Nancy White
Merv, thinking of you and your family. I particularly remember you and Maureen at various DNS events and how much you both seemed to enjoy being with each other and all your many friends. Get some rest and take care. Andree Klassen
- Andree Klassen
Our deepest condolences to the family from all of us at Casa Dante , Mrs Shaw was such a lovely lady . We always loved her stories . From Dante and Staff .
- Casa Dante
It has been a long slog for all of you. I have missed Maureen for a long time and so has mom. Now they are together in death as they were in life - one of mom's dearest friends. We share your sorrow and perhaps relief as well. So many great memories of Maureen, her sparkly personality, late night visits to our house, how long it took her to pick out fiddleheads at Sobeys, the beautiful wedding shower she hosted for me, the parties, but mostly her laughter and the laughter in your home. Hugs from Donna & Family xo
- Donna Langille
Dear Pat and Family Shaw, I am incredibly sorry to read this sad news. I have many lovely memories of your mom, Pat, from all that time spent at your beautiful, welcoming home. I am sure you have millions and millions more and so very much hope that they help you through this tough time. Sending my love, Val
- Valerie Jones
Merv My sincere condolences to you and your family. A long tough journey comes to a blessed ending. David
- David Ritcey
Deepest sympathy Merv & family. Carolyn especially has fond memories of such a wonderful neighbour on Marlborough Ave.
- Dan Reid
Dear Merv, Pat, Donald, Greg and Sharon, Maureen was a beautiful lady in every way. My Greenham family on Marlborough Avenue were blessed to have the Shaw family as neighbours and I am happy that you, Merv, are still in your lovely home. Jim and I are away and so wish we could join you all on Thursday for Maureen's life celebration. Our thoughts will be with you all. x Sue & Jim Gould
- Susan Gould
Merv, thinking of you today. Our hearts are with you. Bill VanGorder
- Bill VanGorder
Dr Shaw After going to see you for daytime appointments for a few years, I once had an evening appointment for a change. And there behind the desk was the most beautiful lady with a welcoming smile. I thought for sure a movie star. I later learned it was your wife. She was so very very kind and comforting. My deepest sympathies to you and your family for your loss.
- Clara Deveau
Our thoughts are with you. Jane Plant and George Cotaras
- Jane and George
My deepest condolences Merv to you and your entire family
- Abdool Razack
Merv, remembering lovely Maureen, and sending you our sincere condolences and best wishes at what must be a very sad time. Judy and Edgar Gold
- Judith Gold
A long struggle, sorry to hear of your loss.. Larry & Sharyn
- Larry Harris
My deepest condolences to the entire Shaw family. Maureen was a lovely, kindhearted person.
- Judith Guernsey
my prayers are with you at this time may you have fond memories of maureen . love jerome
- nina mac donald
Dear Sharon thinking about you knowing how much you loved your Mom and what a beautiful relationship you guys had . prayers with you and your family
- nina mac donald
Maureen Shaw (and her family) were the nicest people and the best neighbours we had. We want to convey our sympathy to her family and may she rest in peace. Fazal and Patricia Rahman
- Fazal Rahman
So very sorry for your loss. Sending love and hugs your way. Take care.
- Andrea Burry
Merv & family Our deepest condolences to you & your family. Many happy stories from Leigh of time spent at the Shaw home & cottage. Rest in peace, Maureen. The Huestis Family
- Stuart Huestis