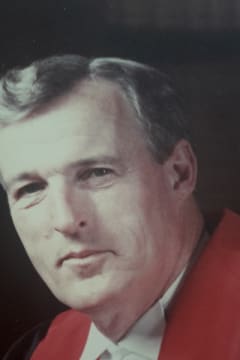 The Honourable (retired) Justice D. Merlin Nunn passed away on Thursday, May 21, 2020 at the age of 89. Born in Whitney Pier, Cape Breton, he was the son of the late Bruce Clement and Florence (Merlin) Nunn.

Merlin (affectionally called Pipe or Piper) attended school in Whitney Pier at Holy Redeemer Boys’ School and Sydney Academy. Following High School, he attended university at the age of 15, where he received his Bachelor of Arts degree (1950) and a Bachelor of Education degree (1952) from St. Francis Xavier University, Antigonish. He taught school in Bowsman Manitoba for two years before entering Dalhousie Law School. While teaching in Manitoba he was inducted into the Sports Hall of Fame for baseball. Upon graduating in first place from Dalhousie with a Bachelor of Laws in 1957, he received the Ford Foundation Scholarship to attend Harvard University where he received a Master of Laws Degree in 1958.

In 1960, Merlin worked as a lecturer in judicial remedies, commercial law, labour law, and labour relations at Dalhousie Law School. Teaching at Dalhousie would continue to be a part of his life for the next decade.

At the same time, in 1960, Merlin joined the law firm of Rutledge, MacKeigan, Cragg and Downie. In 1967 he was accepted into partnership at the firm and appointed Queen’s Counsel in 1972. In 1973 he became a senior partner at Cox, Downie, Nunn, and Goodfellow.

In 1978 he was appointed as the first Chairman of the Nova Scotia Civil Service Employee Relations Board and continued to be reappointed annually until his appointment as a Judge. In addition to this appointment, Merlin was chosen as chairman or as single arbitrator in a significant number of Nova Scotia arbitration cases.

In 1982 Justice Minister Jean Chretien announced the appointment of D. Merlin Nunn, Q.C. as a Judge of the Trial Division for the Supreme Court of Nova Scotia.

In 2005, the Nova Scotia government appointed the Honourable (retired) Justice D. Merlin Nunn as the Commissioner of a public inquiry. This examined the events of October 14, 2004, in which Theresa McEvoy, a 52-year-old teacher's aide and mother of three boys, was killed when the car she was traveling in was broadsided by another vehicle driven by a serial youth offender.

Subsequently named the Nunn Commission, the investigation and resulting report was a landmark public inquiry into Canada's youth criminal justice system. The Government of Nova Scotia accepted all of the Commissioner's recommendations and published an official response. The Nunn Commission's findings have also been cited as a significant factor in changes to Canadian Law dealing with young offenders.

Throughout his career, Merlin was actively involved in community, social, and church organizations. He served on the Board of Directors for the Home of the Guardian Angels; Sacred Heart School of Halifax; and the Senior Citizens’ Housing Corporation. Later in his life, Merlin worked with parishioners of Saint Patrick's Church, Halifax and the Heritage Trust of Nova Scotia in saving the church that was built in the 1880s by Irish immigrants.

For over 40 years the Nunn family has spent their summers at their home in Chester, N.S. where sailing, golf and tennis were a major part of everyday life.

Cremation has taken place. Memorial service to be held at a later date. 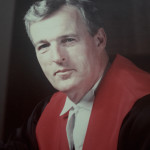