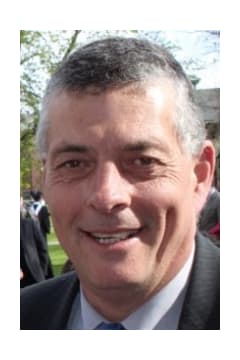 Dalrymple, Paul William, 60, of Dartmouth, Nova Scotia, passed away peacefully Tuesday, March 17, 2020. Born on April 24th, 1959, in Halifax, he graduated from Prince Andrew High School. He was passionate about his work as a skilled millwright and machinist. A graduate of Dartmouth Regional Vocational School, Paul began his career at Imperial Oil and, after a few stops in between, he was set to reluctantly retire from Maritime Paper Products.

Paul loved to spend time with his daughters and his grand-dog Pepper, and to make his friends and family laugh. He enjoyed model trains, military history, and had a passion for reading, music, and film.

The family would like to offer thanks to the staff at Hospice Halifax for their excellent care during Paul’s last weeks. Paul was deeply grateful for his cancer care team, who helped him live well following his diagnosis. He was also very appreciative of the Smith-King family for their support during this difficult time. A celebration of life will be held at a later date. Donations in Paul’s memory may be made to Hospice Halifax (https://hospicehalifax.ca/).

Paul & I worked together @ Sobeys and would go to the clubs after work either in my Beetle or his beloved 68 Camaro I believe. We had some great laughs during those years. So sorry to hear of his passing.
- Neil Naugle
I am so deeply sorry to hear that Paul has passed. I knew Paul from High school and working at Penhorn Mall through High School. I remember Paul as very kind and funny. My sincere condolences to his family and partner and friends. Thinking of you Rob at this very difficult time.
- Rohita Keeping
I am shocked and saddened to hear of Paul's passing. We knew each other from high school and I bought my first car off Paul. He was a good man. My condolences go out to all his friends and family.
- DON GRAHAM
Rodge, I was so very sorry to hear about Paul's passing. Your brother and I used to have some really great discussions about books and movies. It is striking how much he looks like your dad. Gone way too soon. My sincere condolences to you, your mom and all your family.
- Linda White
Wayne and I are expressing our deepest sympathy to you and your family at this very difficult time. Paul was a wonderful son and father to you all.
- Barb Dalrymple
Condolences to the Dalrymple family. Paul was a great millwright/machinist who would help anyone with a project or problem. Working with Paul was a pleasure, he had an uncanny way of lightning the mood or making us laugh. My favourite was when he would sing copperhead road but change the lyrics to tell stories of coworkers with kindhearted wit.
- Adam Cameron
I was very sorry to learn of Paul's passing. I had the pleasure to have worked with Paul at Maritime Paper Products. Paul always greeted everyone with a friendly face and a genuine kindness.To Paul's family please accept my sincere condolences for your loss. He was a great guy.
- Gary Johnson
Sorry for your loss. I worked with Paul in the early '80's at the old Sobeys Penhorn store #400. He must have worked there as he attended trade school, as I did.
- Bill Gay
To all of Paul's family and friends, our hearts go out to you in this time of loss - Barb & David
- Barb King
Dear Chrissie & Family, please accept our heartfelt sympathy. So sorry to hear of Paul's passing. Sincerely, Gerry Flinn and Kelly Dillman
- Kelly Dillman
Permettez-moi de tu prsenter mes condolances les plus sincres pour le dcs de ton pre
- Debby Chipman
Dear Chrissy, Sincere condolences to you and your family. We are so sorry. Diane and Mike
- Diane Hebb
Very sorry for your loss Tina , Emily and Kate. Thinking of you all as you celebrate the life of Paul during this very difficult time.
- John Fuller
Christina and Paul's family, we are so sorry to hear about Paul's passing. Our thoughts and prayers are with you at this difficult time. Rest in peace Paul.
- Fullers Calgary
Sincere sympathy, my prayers and thoughts are with you.
- Joyce Cormier
Aunt Chrissy and Cousin Robby and family , so sorry to hear of Pauls passing , thinking of you all at this difficult time , take care , sending hugs
- Kelly Charlton
Robby and Joanne, so sorry to hear this sad news. Paul was a good man, I remember when he worked at the Esso refinery...thinking of you and your entire family at this very difficult time.
- Alan Gates
Chrisy and Rodge and family so very sorry for your loss i knew Paul years ago and he would talk about his much loved "light blue bronco" my thoughts and prayers are with you at this time sincerely Myrna (Warner)
- Myrna Warner
To Christine and Paul's family - Very sorry to hear of Paul's passing. I worked with Paul at Moirs. My sincere condolences to you all. God Bless
- Kelly Jarvis