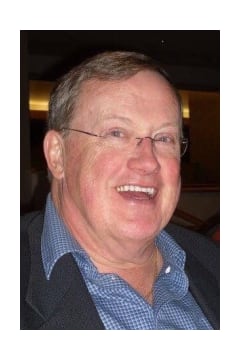 Peter Davidson Chenhall, 71, of Dartmouth NS passed away suddenly February 10, 2018 at Dartmouth General Hospital. Born in Moncton, NB he was raised in Herman's Island Lunenburg. He was a son of the late Isabelle (Silver) and Frederick Chenhall.

Throughout his working career in sales he spent time in both Ontario and Nova Scotia. He worked for Halifax Chrysler Dodge for over 25 years and retired in 2017. He was kind hearted and fun loving. He loved to travel with his wife Edna, and his favorite trip was to Florida for Christmas. He always had a positive outlook on life and had a story to tell. He was often found in his favourite arm chair reading a book.

He is predeceased by his wife Edna (Mason-Oickle).

A Memorial service will be held at 11am Friday Feb 16th at the Salvation Army Church-Fairview Citadel, 50 Gesner Street, Halifax. Burial will take place at the Atlantic Memorial Gardens, Dartmouth, immediate family only. At a later date the family will celebrate Peter's life by spreading the remainder of this ashes at Herman's Island, NS.

In lieu of flowers, please make donations to the Salvation Army Church-Fairview Citadel.

Peter and I attended school together in Lunenburg, were on the same curling team and enjoyed many happy times together. I have only fond memories of our childhood together. My deepest sympathy to his family. Dave Beck
- David Beck
My sincere condolences to Pete's family. We were together in the Lunenburg Academy for 4 years until 1964. He was a warm and friendly guy to all. I was always amazed at his amazing mental math abilities buy using ( as I recall?) the 13x table. No idea how he did it but it worked! Thanks Peter for some wonderful memories.
- Mike Adair
The Chenhalls came to Lunenburg when I was a young girl at Academy. I was a classmate of his sister-in- law Carolyn. Peter was an active part of his class with a broad grin. He was taken far too young. Sincere sympathy to those left behind.
- Roxie Smith
We are very sad to hear of Peter's passing. I am writing this on behalf of all our staff here at Scotia Chrysler in Sydney NS, especially Bert Currie who dealt with Peter frequently over the years. Peter was a friend to the Dealership over the years and was very helpful to us when times were tough. Please pass on our sincere condolences to his family. May He Rest in Peace.
- Robert Baldwin
Graham, Janet, And Boys, we are sending a heartfelt sympathy with love and prayers at this difficult time, take care, Lisa, Chris, and boys.
- Lisa Macdonald