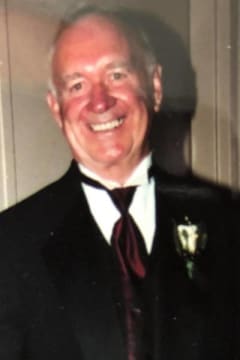 Reuben Laurence “Larry” King died peacefully in the Dartmouth General Hospital on July 17th, 2020 at the age of 87.

Dad was an amazing father, grandfather, uncle, brother and friend. His smile lit up the room, his laugh was contagious, and his dance card was always full. He was truly one of kind, touched so many people, and was loved by all. He was put on this earth to make it a better place, and he certainly did that.

Born on February 4th, 1933, in Woodside, Nova Scotia to the late Lyle and Loris (Hynes) King, Dad left home in 1952 to embark on a 30 year career with the Canadian Armed Forces. A logistics officer by trade, he rose to the rank of Warrant Officer, before retiring in Moncton.

Restless in retirement, Dad was a strong believer in the value of being an active volunteer in the community. To that end, while in Moncton, he devoted countless hours to both Big Brothers Big Sisters and the Royal Canadian Legion Branch 6, where he served for several years on the executive and is a Past President. Upon relocating to Mineville, Nova Scotia in 1998, he was an active volunteer at the Lake Echo Food Bank for 20 years.

An avid sportsman, Dad enjoyed playing various sports, but his true passions were softball and curling, both of which he played into his 80s. In softball, he played and umpired at the highest levels, leading his team to the 1960 Alberta Senior “A” Championship, and umpiring at several National Championships throughout the ‘70s. As a curler, he was a long time member of both the Beaver and Dartmouth Curling Clubs and competed in 3 Canadian Legion Senior Curling Championships, while winning the Canadian Forces Small Base Championship in 1981.

The family would like to express their sincere thanks to the nursing staff of 4th Floor West, Dartmouth General Hospital for the wonderful and attentive care given Dad during his stay.

Due to COVID-19, a private family interment will take place, with a celebration of life for extended family and friends held at St. David’s Church, Lake Echo at a later date.

In lieu of flowers, donations may be made to either the Heart and Stroke Foundation of Nova Scotia, or the Alzheimer Society of Nova Scotia.

Dear Dennis and family, our sincere condolences on the passing of Rueben, we know he will be missed by many and would like to offer the poem below. May his journey Home be swift. Alan & Jo-Ann The Rose Beyond The Wall A rose once grew where all could see, Sheltered ~ beside a garden wall, And as the days passed swiftly by, It spread its branches, straight and tall. One day, a beam of light shone through, A crevice that had opened wide, The rose bent gently toward its warmth, Then passed beyond to the other side. Now you , who deeply feel its loss, Be comforted ~ the rose blooms there, It's beauty even greater now, Nurtured by God's loving care. ~ A.L. Frink
- Jo-Ann Chinn
Dear Donnie, Dennis, and Families. I was sorry to hear of Rueben's passing this past week...He was such a jolly man and fun to curl against. My late husband Reid MacLean and I had the pleasure of curling against Rueben (Basin Boys) for many years in Atlantic Oilmen's Bonspiels. We always groaned when we saw we had to play the boys.... may your memories of Rueben bring you much comfort and joy in the coming months. Sincerely Barb MacLean
- Barb MacLean
Our condolences to the King family, but especially Dennis & Don who we knew quite well along with Rueben who we curled against in several bonspiels & I don't think we were ever the winners. It was always a lot of fun & we all had many laughs & shared a few drinks. Rueben will be in a much better place, free of pain. You will miss him dearly but he will always be in your hearts. May he RIP. Hugs, Carl & Ruby Nugent
- Ruby Nugent
Dennis,Tony.. my sincere condolences in the passing and loss of your Dad.
- Lynda Petrie
So sorry to hear about Ruebin. Always so happy to be around. He will be missed by many. Heather and Glen.
- Heather and Glen
Dear Brother , My daughters, Kelli and Kim's love for you was a joy for me to watch over the years . Thank you for that great relationship you created with them .and professionally polished over the past 50 years :).It was always filled with Fun and Laughter ..The greatest memory for me will be the one that occurred on February 10th , on a Monday Morning at 11:30 am , 2020, at The Dartmouth General Hospital . The morning my brother Reuben and I prayed together and my brother received the gift of Salvation . Now I know he is in Peace and Joy in Heaven where there is no more pain , no more.sorrow and no more tears . God called you Home , Dear Brother , Rest in Peace with The Lord . Amen ..
- Allan King
My condolences to the King family on this loss. Larry was one of a kind. I used to love spending time with him and my Father at the camp (along with the rest of the clan). The stories that Larry told were some of the funniest that I have heard (the "glove" or the mountain goat) and I will cherish the memories forever. He was always spoken of fondly by everyone that knew him and I am especially thankful for his friendship with my Family. Love you Reuben
- Terry Sparks