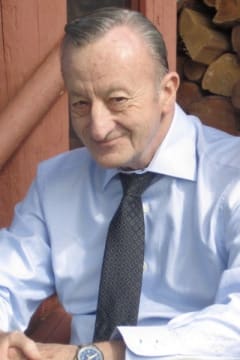 Winston R MacDonald at 79 years, has left on his final flight; journey onward where many await his arrival. He was born in Glace Bay, Cape Breton and was the son of Angus A MacDonald and Catherine A MacDonald (Robertson).

Winston was always a hard worker, dedicated to doing his job with pride. His professional life included a short career working at a bank before he began his lifelong career in aviation. He started at Eastern Provincial Airways, both in Newfoundland and Sydney, NS and in 1969 he joined his family at Air Canada where he would spend 29 years as a Customer Service Agent, retiring in 1998. Winston is remembered by his colleagues as having a friendly smile, genuinely connecting with everyone, a great storyteller and loved by all. He enjoyed his colleagues like family.

31 years ago, Winston and his family moved to Dartmouth NS. Winston loved his family; his greatest pride and joy is his children Jeffrey MacDonald & Stephanie MacDonald and his grandson Dylan Dumaresq. He loved taking Jeff & Stephanie to Disney World in Florida each year and with Dylan, he would parade around the Mic Mac Mall with such excitement, he would give all his time. Family is the greatest gift in his lifetime. He also loved being a big brother to Donnie MacDonald and Cheryl (MacDonald) O’Neill. These three growing up would spend so much time at the bungalow on the Mira River, having big bellied laughs and goofing around.

Winston loved being by the water, by the ocean and his favorite place was on the Mira River. He shared many memories of water ski-ing, canoeing and fishing on the Mira, and always looked forward the next visit. As a young boy, Winston was a proud member of the Boy Scouts and later becoming a long-standing loyal member of The Tyrian Youth Lodge NO. 45 Glace Bay (Freemasons). His journey through life has made him many friends, and he will be missed by many. He is survived by his sister Cheryl O’Neill (Paul O’Neill), brother Donnie MacDonald (Dianne MacDonald), ex-wife Patricia Mills, their children Jeffrey MacDonald (Shannon Reid), Stephanie MacDonald (Roger Darrow), his grandson Dylan Dumaresq and many nieces and nephews.

Winston wanted to get back to the Mira again, and it is in our hearts that he would want us to celebrate his life there. A celebration of Winston R. MacDonald will be arranged at a later date in 2020 in Cape Breton.

Raise a glass of whatever you fill your cup with and toast to a well loved, celebrated man, Winston “Winny” MacDonald.

Heartfelt condolences to Jeff,Stephanie,Donnie,Cheryl& Families.Enjoyed a lot of great times with Winston....on the frozen Brickyard in the Fiat,my introduction to the SkylineClub & the good times at Trasuk's ,all great memories I'll always have ,.
- Daniel Mac Cuish
I had the pleasure of working with Winston both in Sydney and Halifax. He as always a great worker with a wonderful personality. May the memories you have of him warm and comfort your hearts. In my prayers Jim Miller
- Jim Miller
To Donnie,Cheryl and Families: Words fall short of expressing my sorrow for your loss. I am deeply sorry to hear about the passing of Winston. Marilyn
- Marilyn Best
To Cheryl (Paul) and all of Winston's family our deepest sympathy. May he rest in peace.-- Mary & Joe Matheson--Glace Bay
- Joe Matheson
Another of the great ones left us. Winston was a treat to work with, all the stories and memories will live on for ever. My sympathy goes out to Jeff, Shannon, and all his family and friends. I will tilt my arm in memory. RIP Winston
- Brian Lent
My condolences to Winston's family. I worked with Winston beginning in the late 60's and traveled with him to Air Canada Curling Bonspiels pretty much from coast to coast. He was game for anything. A story teller to be sure, immaculate in his appearance and a real Caper. Rest easy B'y.
- Betty Boyd
My sincerest condolences to Cheryl, Donnie and families.
- Lorna Barro
Jeff and Stephanie, Sincere condolences on your Dad's passing. What a sweet man he was. A proud Cape Bretoner! I have fond memories of working with him at YHZ. May he rest in peace.
- Kelly Corbett
What an awesome man! Not only was he from the Bay, but our neighbors up the street. And our "out on the Mira" buddie. Plus, I had the pleasure of working with Winston at Air Canada at Halifax airport. He nieknew everybody that got off the Sydney flights. He would say as we met the flights together, "did you know that fella?" I I didn't, he would tell me who it was and always a good story. Always a great story teller for sure. AND loved his family. Sincere sympathy to you Jeff and Stephanie and family. And Donnie and Cheryl. Love and prayers
- Judi MacPhee
Winston was a great fella, I have many memories of him and Dad waterskiing "Out on the Mira". Hugs to all of you from the Saweczkos.
- Karen Saweczko
Stephanie, I am very sad to read of your Dad's passing. It's so hard to say bye for now, especially during these times of not being able to come together to mourn. My sympathies to you all. Dee
- Dee Vipond
Sincere condolences to all on the passing of Winston.
- Brenda MacRury
We have known Winston for many years, always a smile and a story. Our prayers are with Jeff, Stephanie, Shannon and Dylan, I know you have very fond memories of Winston, hold on to these special moments. David and Sandra Lackie xoxo
- Sandra Lackie
I had the pleasure of meeting Winston quite a few times and he always had a big smile for you. Please accept my condolences to his family and friends at this very difficult time. Sincerely Laurie Clarke
- Laurie Clarke