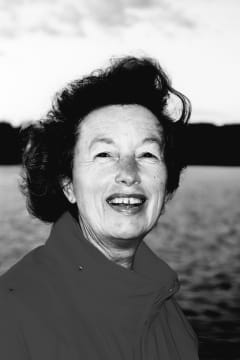 Age 90, Halifax/Chester passed away peacefully on January 17th surrounded by family in Shannex Parkland at the Gardens, Halifax. Born July 20, 1932 in Forrest Hills, Massachusetts. She was the daughter of the late George Ulysses and Florence Ethel (Gerrard) Gildersleeve.
She was brought up and schooled in Needham, Massachusetts. She attended St. Francis Xavier University, graduating with a BA major in English. Furthering her studies, she moved to New York where she studied American Literature at Columbia University. Joan taught literature in Long Island City, New York. Joan and her sister Mary Claire spent their summers at Martha’s Vineyard.
Joan met her husband Merlin (Pipe) in the living room of her parents’ home in Needham, Massachusetts. Her mother was famous for accommodating Canadian students for Sunday dinners, and that was the start of their love. A love that spanned over 61 years.
Merlin was in Boston on a Rockefeller Grant, attending Harvard University, where he received his master’s degree in Law. Joan and Merlin were married that summer at St. Joseph’s Roman Catholic Church in Needham, Massachusetts. They moved to Halifax, Nova Scotia, where Merlin taught Law at Dalhousie University. Joan taught from grades primary to high school.
Joan and Merlin were avid tennis and golf players. They were members of the Waegwoltic Club of Halifax, Chester Tennis Club, Chester Golf Club and South End Tennis Club. Joan and Merlin settled in Halifax/Chester, where they raised their four children and build their summer home of many years in Chester, Nova Scotia.
Joan was a regular volunteer within the Catholic Church where she headed Sunday catechism in the schools. With her very good friend Marge Hallett, they started the Family Mass at Canadian Marty’s Parish, Halifax.
Joan was involved in book clubs, bridge clubs and was an avid gardener. Joan was known for the beautiful gardens and trees surrounding their Chester property. The love she had for her garden, like her growing family, never wavered. Curious about what you might have read or thought about recent events, she was interested in conversation, not just chat.
Joan was an endless volunteer through The Convent of the Scared Heart, the IWK Foundation and was on the Board of St. Francis Xavier and Dalhousie University.
Joan and Merlin were always happiest when spending time with their children, grandchildren and great-grandchildren in Chester.
Joan was kind, gentle, loving and was a true friend to many and will be deeply missed.
Joan is survived by her four children, Mary (Andrew Comstock), Alberta; Caroline, Chester, NS; Bruce (Toni Thomas), Halifax; Douglas (Carole-Anne Mackinnon), Fitchburg, Mass; 11 grandchildren; 11 great-grandchildren; her sister, Mary Claire MacLellan, Antigonish, NS.
Joan was predeceased by her husband, The Honourable (retired) Justice D. Merlin Nunn.
A special thank you for the compassionate care given to Joan by the staff and Palliative Care Team at Shannex Parkland at the Gardens and her many caregivers.
A private funeral service and internment will be held at St. Augustine’s Roman Catholic Church, Chester, NS.
No flowers by request. Donations can be made to St. Augustine’s Roman Catholic Church, Chester, NS.