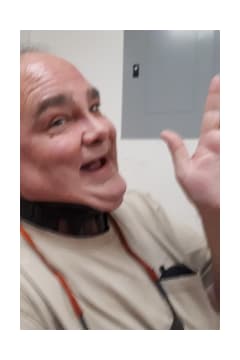 It is with great sadness we announce the sudden passing of Terrance Malcolm Newcombe, 53 of Upper Tantallon,NS.

Terry passed at home surrounded by loved ones after a long battle with sarcoidosis.

He was the son of Sheila Selena Slaunwhite (Williams) Upper Tantallon and Garry Gerald Newcombe (Sackville)
He was also survived by his sister Tina Melanson and Neice Haley Melanson both of Upper Tantallon.

Terry attended Dartmouth High School. He later worked at Canway Graphics with his father for a number of years. He eventually went on to run Atlantic Foil Specialties and later co-owned a prosperous silk-screening company in Halifax.

He was an avid fly fisherman and animal lover. His wild squirrel and various wildlife on our deck will miss his daily feedings. For years, our dog Nike (predeceased) never left his side. They were true buddies till the end. I think he will be waiting for Terry.

Terry was the kindest soul and never let things get him down for long. Despite years of battling sarcoidosis and all of the side effects of this disease. Even with a damaged spine, paralyzed leg from the knee down, broken neck with complications that left him in a neck brace for the last 20 years of his life. He always kept his sense of humor and positive spirit. No matter where he lived he made friends with everyone he met in the community. He seemed to attract people with his spirit and courage. His sense of humor just made him so contagious. He was devoted to his mother through her ongoing battle with lung cancer Always by her side. He was the best "Uncle Bubby" to his niece Haley Morgan Melanson, who loved him dearly. He was a protective older brother who loved to prank his sister. Terry was the best guy you would ever want to meet and he will be missed by friends and family.

I don't know why he had to go so soon, but I do know, if love could have saved him he would have lived forever.
Gone but not forgotten Bobby will never forget you we love you so much.

Terry and I were good friends years ago, and we lost touch with each other for reasons that were not mine or his. I tried many times to find him, mostly Facebook, could never remember his middle name or his moms name until I mentioned it to my son last night and he found this in 5 minutes. As soon as I head the names I remembered 🙁 . I wanted so much to find him and take up our lost friendship...Now it will never happen. I am sorry for your struggles Terry, and wish you could have know I missed your friendship so much. RIP my dear friend....
- Georgina Dixon
I'm very sorry to hear of Terry's passing. Met Terry on his daily visits to Petro Canada and enjoyed our conversations. He was a wonderful person who made my day when he stopped in. RIP Terry
- Rob Densmore
I will miss our daily conversations at Petro. You were one of my favourite parts of the day. I have been thinking about you for a month, wondering where you have been. I will miss you. My thoughts are with you and your family.
- Camryn Densmore
Tina & Haley, we are so sorry to hear of Terry's passing. He was one of the good guys in life who was so friendly, kind & caring. We are sure he is chatting up a storm and making lots of friends in Heaven! God Bless you both & keep you strong! Rick & Ann
- Ann & Rick
Sorry to read of Terry's passing and at his young age. We haven't seen him since being out in Tantallon and at Muriel's funeral service. Our sincere thoughts go out to you, Tina, and Gary. Take Care. Agnes, Doug and families
- Agnes Durling
So very sorry for your loss Tina and Haley. We send you our deepest condolences and support. Fiona, Ed, Rachel, Lachlan.
- Sylvester Family
Terry was an amazing person to have known, he’d always come down to the Dollarstore every evening and threw the day multiple times, and every time he’d always stand around and have a brief chat. I always looked forward to chatting with Terry every evening when I was closing and talking about anything that had occurred threw out the day or threw the week, Terry always had to make a joke or jokes while being around. I’ll always cherish every moment with Terry while being at the Dollarstore. Thinking of you
- Vanessa Cooper