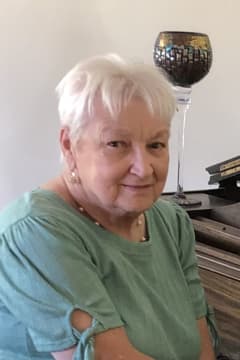 Barbara “Barb” Gladys Crane of Oceanview Manor, formerly of Cole Harbour, passed away peacefully on June 3, 2022, at the age of 83.

Born December 26, 1938, in Glace Bay, Nova Scotia, she was the daughter of Stanley Lloyd and Laura (Spencer) Lloyd.

Barb’s early years were spent in Mira, Cape Breton. As the eldest of her siblings she quickly became the caregiver of her younger siblings, taking each one under her wing, a role she took seriously even at a very young age and enjoyed being able to teach her younger siblings all the things she knew.

She often told her own children of her adventures travelling as a young girl from Mira to Glace Bay on the train every month to visit the “city” and pay the family bills. She enjoyed those little trips so much.

At the age of 17 , she set off with her best friend, Elsie, to Southern Ontario. She was only there a short time when she caught the eye of a certain handsome Irishman who knew he wanted her to be his bride. She married Robert John Smyth in 1956 in Tilbury, Ontario.

In August of 1957 she and Robert welcomed their first child, Kevin, a wonderfully kind, and well mannered boy who she claimed never gave her one minute of worry.

In October of 1961, they welcomed their first daughter, Sandra, a very shy little girl who was quiet, reserved, and loved reading.

In February of 1968, they welcomed a second daughter, Colleen, a little girl who was a real “tom boy”, not afraid to get dirty and loved to climb trees and fish.

In July of 1977, they welcomed their third daughter, Janet, a curious girl who loved all things girly and had a wide-eyed interest in seeing the world even from a young age.

Barb will always be remembered for her quick whit, her gift of gab that allowed to make fast friends in any situation, and as someone who enjoyed spending time with friends and family, doing puzzles, playing cards, shopping, and going for drives. She was an avid fan of hockey and baseball and could talk sports with the best of them.

Barb was a member of the local Cole Harbour congregation of Jehovah’s Witnesses, and formerly of Harbourview congregation in Sydney. She was a loyal member of the congregation and enjoyed sharing her faith with others. Barbara held fast to her faith always, as it provided not only comfort and sustenance to her in difficult times, but also a hope for the future.

She was pre-deceased by her parents, her son Kevin, and siblings Faye, John, and Deloris (in infancy).

Cremation has taken place and a service will take place on Saturday, June 18, 2022, at 2pm at the Kingdom Hall of Jehovah’s Witnesses, 101 Forest Hills Pkwy, Westphal, NS, B2W-0N1.