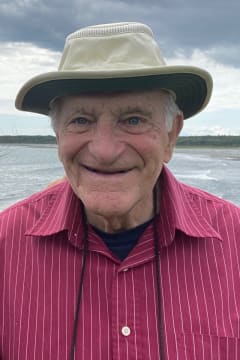 Francis Tibbetts reached the end of his journey at age 85 after living life to the fullest until he was diagnosed with lymphoma earlier this year.

He was a one-of-a-kind character with many passions: sailing, boat building, storytelling, the water, driving commercial trucks and buses, motorcycling, and his eclectic mix of friends.

Francis was Nova Scotian to the core and couldn’t contemplate living anywhere other than the paradise of his home province. He spent what he described as a “blessed” childhood in Brighton, a small community on the rocky shore of St. Mary’s Bay in Digby County. He lost his mother, Ivy, to tuberculosis the day after his fourth birthday and was raised by his father, Willis. Neighbor’s unlocked doors were always open to Francis, who felt welcome with an assuredness that required no knocking.

During the Second World War, he was sent to live briefly with his aunt in Ontario. It was an experience that helped foster an independence that he highly valued.

Francis developed an enduring love of learning during his early education in a one-room schoolhouse. He later became the first high-school graduate from Brighton, made possible through new bus service to Digby Regional High School when he started Grade 7. He moved to Montreal after graduation and then joined the navy, which took him to Pensacola, Florida for naval air training. He served aboard HMCS Quebec and travelled extensively, often as the admiral’s “doggie,” carrying his camera gear.

Francis settled in Halifax in the late 1950s, where he married his first wife, Bernice, and had three children. He joined the Naval Fleet School at CFB Stadacona, becoming an accomplished electronics instructor. It was a career rooted in a fascination with electricity, a passion that inspired him as a teenager to install the first light bulb and socket in his father’s home. (His father wanted electricity so his son could study but Francis had an ulterior motive of building a radio). Francis retired from the fleet school at 56 and decided his next job would be outdoors after a career spent in the classroom. He obtained a commercial trucking license and became a long-distance driver for 15 years. But he worked to live rather than lived to work.

Francis was an avid sailor who built four wooden racing boats. His first, Little Sister, was constructed in his backyard in the 1960s. He was so determined to own a boat that he toppled a tree with a hacksaw to craft the mast and boom. Butterfly and Apocalypse followed in the ’70s. His final masterpiece was Apocalypse 2, designed by his son, Andrew. The 40-footer garnered a newspaper headline as the star of the famed Chester Race Week soon after its 1983 launch. With Francis at the helm, Apocalypse 2 was one of the fastest racers in Nova Scotia during its heyday. Its mast has a resting place of honor as the flagpole at Francis’s beloved Armdale Yacht Club, his home away from home for more than five decades. He sailed in the club’s Wednesday night races until age 84 and still kept two sailboats: Wednesday Knight and MOA. Francis would have been thrilled to learn that a new trophy for Armdale’s top junior Sailor is named after him. His proudest racing victories included many AYC club championships and the prestigious Prince of Wales offshore race in 1999 on a day that it was blowing a gale.

Francis was just as much at home in the water as on it. He swam on the high-school team and would do daily laps through much of his adulthood at the Waegwoltic Club or the former Halifax YWCA, where he was a longtime volunteer swimming instructor. His volunteerism extended through his life and he was awarded a certificate for 100 blood and plasma donations.

Francis was nothing if not quirky. He had encyclopedic knowledge and could chat at length about a vast array of subjects. And he sure loved his stories. He was often fondly mocked for his incredible capacity to tell the same ones over and over again. Francis rejected pretension and extravagance. He was a clothing thrifter long before it became fashionable. He would boast about his pre-loved acquisitions and his signature outfit was an untucked long-sleeve shirt and jeans. He never owned a new car and he prided himself in driving “beaters.” His final vehicle was a 30-year-old Ford truck. He was always happy behind the wheel. He navigated a double-decker tour bus through the hilly streets of downtown Halifax into his eighties. He drove a motorcycle locally and around the Maritimes, selling his last one at age 81. He renewed his Class 1 semi & tractor designation on his license just before his 85th birthday.

He and his wife, Everetta, were snowbirds for two decades, spending winters in a camper trailer in Florida. They hit the road every Boxing Day, stormy or not, returning in March. One of their memorable trips was a seven-week expedition up the U.S. Intracoastal Waterway aboard a 30-foot C&C that Francis bought in Florida.

In a surprising life twist, DNA testing revealed in 2020 that Francis was adopted as an infant and had five living siblings, an aunt, and more than 20 nieces and nephews. He was delighted to meet many of them in person or on Facebook.

Francis was predeceased by his parents, Willis Tibbetts in 1975 and Ivy Tibbetts in 1940. He is survived by his wife, Everetta MacKinnon, and three children, Andrew, Janice (Mike Roper) and Cheryl (Lonsdale Holland); and three grandchildren, Meredith Holland, Oscar Holland and Anna Roper.

A celebration of life will be held at Armdale Yacht Club at 2 p.m. on October 29. Donations to Feed Nova Scotia are welcome.