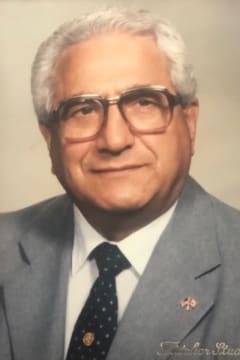 The Reverend Dr. Francisco (Frank) Joseph Guinta, 98, Dartmouth NS, went to be with the Lord he served. He passed away peacefully at the Veterans Memorial Hospital in Halifax, Nova Scotia on Canada Day, July 1, 2022. Born in Montreal, Quebec on September 4,1923, he was the third child of Luigi and Katarina (Foti) Giunta (Guinta).

Following retirement from the RCN he felt a call to enter training for the Gospel ministry. This calling was a direct result of his itinerant ministry serving as the “Singing Evangelist” in Martime Baptist churches. He earned a BTh from Acadia Divinity College, Wolfville, NS and was ordained in 1968. Later he earned a ThM in 1987 and a ThD in 1989 from International Seminary, Plymouth, Florida. Frank Sr. served several Baptist churches including Lucasville and Hammonds Plains Baptist, Halifax; Faith Memorial Baptist, Yarmouth; Millville United Baptist Church Field, NB; Parker’s Cove Baptist Church, N.S. Serving in the Reformed Church of America, he pastored churches in Montreal, QC; Waupun, Wisconsin, USA; and Cohoes, NY, USA. At the age of 75 he retired to Dartmouth, NS. At the age of 80 he took on the responsibility of serving Clyde Avenue Baptist Church in North Sydney, Cape Breton for five years, retiring for a third time to live in Dartmouth.

Throughout his life Frank enjoyed music, baseball, travelling, gardening, beaches, politics, visitation and sharing his faith. He lived at home enjoying family until his final year of life.

Donations may be made to Acadia Divinity College, 15 University Ave, Wolfville, NS B4P 2R6 or to the charity of your choice.