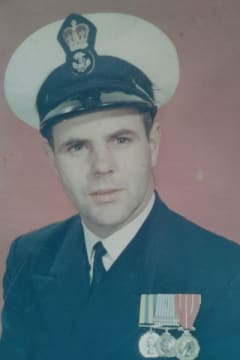 It is with great sadness that we announce the passing of our Dad age 87 on Wednesday February 10, 2021.

Loving husband for 63 years, father, grandfather, and great grandfather. Dad passed away peacefully in Camp Hill Veterans Building after a lengthy battle with Alzheimer’s with his children by his side. Born in Welland, Ontario he was the son of Bill and Mary (Johnstone) Dawson. Dad was a proud veteran of the Canadian navy which he served in from 1951 until his retirement in 1976. He served in the Korean War from April 1953 until February 1954 on HMCS Iroquois. He was a member of the Korean Veterans Association of Canada, Chief and P.O’s Association, Calais Branch 162 Royal Canadian Legion, and S.S. Atlantic Heritage Park Society. He was particularly proud of his involvement on the committee which saw the statue “The Sailor” located on the Halifax waterfront come to be realized. He was so proud and loved his grandchildren always looking forward to the family gatherings and the fun and laughter that came with them.

Daily drives with Mom helped fill in their retirement days especially their trips to Cape Breton to visit Matt, Lori, and the kids. They visited so often they were honorary Cape Bretoners. Dad was an accomplished horseman, in his teen years, who loved to tell stories about his childhood and adventures during his years in the navy.

Our gratitude goes to the Doctors, nurses, and staff of 6E at Camp Hill for their compassion and exceptional care of our father over the last 5 1/2 years.

Cremation has taken place under the direction of Donald K Walker Funeral Director. A celebration of Dad’s life and internment will take place at a later date.

My sincere condolences on the loss of your dad. From a fellow Shannon Parker.
- Patti Christie
Dearest Crystal and Kevin, Mark and Vanda, Duane and Wendy, and Lorrie, Samantha and Liam and all the family: My deepest condolences on the loss of Uncle John. He and Aunt Dorothy were my much loved godparents. I remember they always remembered me on all the special occasions. I always picture Uncle Johnny in his white uniform which he also wore to our wedding. Always looked so sharpe. With all my love and sympathy, Heather (Grant), Abby, and Eric (Jackson).
- Heather Grant
Duane and Wendy, Mark and Vanda and Crystal and Kevin. I loved your dad! I have so many precious memories of Uncle Johnny but my all time favourite is him holding an umbrella over my head as he escorted me into the church at my wedding. He was always there for all the special events in my life, and in later years Bob and I enjoyed extended visits with him and Aunt Dorothy. One always felt royally spoiled nd loved. Praying you will be blessed by all your memories. Sending love and hugs to each of you. God bless!
- Maureen Newman
Duane, Mark, Crystal and extended family. Gosh I have so many memories but one sticks out the most. I think it was the last time I saw your dad. I found a photo of your mom with mine from when we were in Shannon Park and wanted to give it to your mom. Karen and I went over and they were sitting on the front deck waiting. Your mom said that John might not know us any more. He didn't....until we handed him that photo. His eyes filled up and he burst out laughing. A real belly laugh. He then started telling Karen and I all the "antics" mom and Dorothy got into. He talked about our parents friendship, all you kids and his beloved, Dorothy. To say that made our day was an understatement. I hope this memory brings love and comfort. A wonderful man who loved you all with all his being. Hugs to all of you. Xoxoxo
- Janet Leadley
Condolences to all of you . I shared much laughter with both of your parents when they visited Bridgetown with Dorothy's family. Especially the school reunions. Keep your memories close .
- Barb Wiles
Crystal/ Kevin- so very sorry for your loss. Watching your father live with Alzheimer's could not have been easy. Hold on to the good memories!! Love Karen and Terry ❤️❤️
- Karen Webb