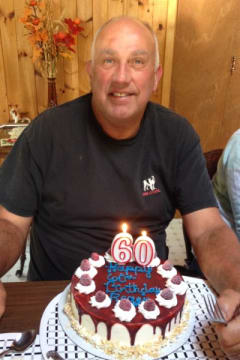 It is with immense sadness that we announce the sudden passing of Reginald Eli Hillier, 63, of Brookside, on October 26th, 2020.

Reggie was born in 1957 to Thelma (Brenton) and Reginald Hillier of Spryfield. In 1980, he married high school sweetheart Debbie (Page) and later welcomed daughters Crystal and Sarah. For over 30 years, he was employed as a letter carrier for Canada Post where he made many close friends.

Reggie was a gentle giant who loved jokes, pranks, fact checking and classic rock. He had a great love of Motocross, racing in his younger years and watching from the sidelines in his later years. He enjoyed computer gaming where he met friends from all over the world. He loved to travel, spending many weeks each winter in warmer climates. His favorite part of vacations was always the food. After retiring, Reggie discovered a love of baking. He enjoyed friendly banter with friends over coffee and loved special occasions and Sunday suppers with his family. He was so proud of his two daughters and loved spending time with them and his granddaughter Emily. The many family cats were always affectionately underfoot and by his side.

Reggie was someone who could fix or build anything and always went the extra mile to help anyone who needed it if they wanted it or not. He loved finding a good deal and teasing Toronto Maple Leaf fans while cheering on his team the Montreal Canadiens. Fun times were always had chatting and spending time with his sister Margie and her family. Many laughs were had with best friends Craig Miles, Sandy Perkins, late Donnie Mielke and many others.

Reggie was predeceased by parents Thelma and Reginald Hillier and mother-in-law Marie Page. He will be greatly missed by wife Debbie, sister Margaret (Greg) Mountain, daughters Crystal (Jeff) Boutilier and Sarah (Darren Ide) Hillier, granddaughter Emily, father-in-law Daniel (Brenton) Page close nieces and nephews and many close cousins. He will also be greatly missed by his large network of friends.

Special thanks to the staff at the QE II Health Sciences Center. In lieu of flowers, donations in Reggie’s memory can be made to the Heart and Stroke Foundation of Canada or your local SPCA.. A celebration of life will take place at a later date.