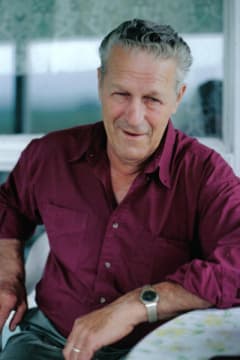 Ronnie was the first of ten children born to the late Percy and Alice (Barkhouse) Gay, in Country Harbour, NS. The large, close family meant that Ronnie’s life was full of weekend get-togethers with family, morning coffee meetups with his brothers, fishing trips to the Harbour, and big yearly celebrations.

Over the years, Ronnie had many jobs. His first was lighting the fire at his one room schoolhouse. When he was older, he worked in the woods with his father, then later at D. Pike Awnings and Goodyear Tire (both in Toronto), and finally at Trenton Works in Nova Scotia.

In the 50’s, Ronnie moved to Toronto where he met and married fellow Easterner Rose Getson (Kildare Capes, PEI). They later moved back to Nova Scotia, settling in Island East River, where Ronnie built a home for them, digging out the foundation with a pickaxe and shovel. They loved to dance, had three children, and celebrated 22 years together before Rose passed away.

In 1983, Ronnie married Velma MacFarlane (Three Brooks, NS). They enjoyed camping and travelling to bluegrass festivals throughout the Maritimes. They built a small cabin by a lake where they loved spending time with their grandchildren, fishing or going out on the ice in the winter. After his retirement, Ronnie took up the guitar and spent many hours learning his favourite country songs. Ronnie and Velma were married for 30 years before she passed away in 2014.

In the last chapter of his life, Ronnie met companion Gerri MacDonald (Creignish, NS). She encouraged Ronnie to live life to its fullest, organizing regular game nights with friends and planning adventures. They went to Ireland, where he kissed the Blarney Stone, the Dominican Republic and Cuba, where he experienced parasailing over the beach. Ronnie also travelled to Ottawa to visit with his great granddaughter Lilly Gay.

In respect of Ronnie’s wishes, there will be no funeral; a private interment will be held at a later date.

From John and Lynne Yantha of Combermere ON, Evey, Jake and the rest of our extended Family. It was our pleasure to spend time with Uncle Ronnie and Aunt Velma during our visits Down East over many years. He was well respected and loved amongst us. His happy and quiet demeanor, along with his enjoyment of sharing stories made our times together most pleasant. Please accept our sincere condolences over the loss of your most precious Brother, Dad, Grandpa.
- Lynne Yantha
I want to send my condolences to Ronnie's family. I knew him since I was a girl living in Eureka. My dad worked with him at the plant in Trenton. Ronnie was a regular visiter at our home. Dad thought the world of Ronnie. We all did. He was such a nice person He will be missed for sure.💔
- June Roddick
So sorry to hear of Ron passing ,my condolences to all the family and Gerri .He was a life long friend to my family ,we will always cherish the fun times and good memories.hugs
- Margie Robson
My sincere condolences to Stacy & Family. Praying for comfort 🙏 time heals.
- Antonia
Diana, Randy and Stacey - So very sorry for your loss of your Dad. My sincere condolences goes out to you all. May you cherish all the loving memories and hope they bring you all peace and comfort.
- Kathy Ferguson
Stacey, Diana - so sorry for your loss. My sincere condolences goes out to your entire family. May loving memories bring you peace and comfort.
- Mary Fletcher
Sending my sympathy to all of Ronnie's family. Ronnie was always a dear friend to me. We will all miss him very much. Love Peggy (Jack) Fraser
- Peggy Fraser
My deepest sympathy to Ronnie's family. I have many great memories of Ronnie and Rose back through many years dancing at their home in the Island East River. Ronnie will be missed by many
- Ross Swineamer
Family Members, My sincere condolences in the passing of your loved one. I first met Mr. Gay when he was a patient in the hospital. He was a very kind person with a great sense of humour. I took a turn at work outside the door to his room and dropped to the floor. No one was around, and I found out later that Mr. Gay was yelling "help, help" for me. I never got to see him again until one day at Shopper's Drug Mart and I asked him if his name was Mr. Gay and he answered yes. I asked him if he remembered me and he said, "you look so familiar". I then mentioned ICU and he said, "Oh my you were the one that passed out on the floor" and I said yes and he said I always wondered what happened to you. So we had a chat and I said, " I want to thank you as my co-workers told me they could hear a voice yelling help. He said, "Yes that was me, you sure hit the floor". We chatted some more and wished each other the best and we went on our ways. I never forgot Mr. Gay. Although I didn't know him well, I will always remember him. Once again, my sincere condolences to you all during this difficult time.
- Annette MacLean
Randy and Diana, it has been many years since we have been in touch. I'm very sorry to hear of your father's passing. Cherish the memories and smile at the good times you enjoyed with him.
- Brent Cameron
Very sorry to learn of Ron's passing. We worked together at Trenton Works. We also attended many jam sessions. Hank Williams was always one of Ron's favorites. Always enjoyed playing with Ron. May your memories serve you well during these difficult times. god bless - Harry Brooks
- Harry Brooks
My sincere condolences to the entire family. Although I was never as light on my feet as he was, itwas always a pleasure to share a dance with Ronnie at all the events over the years. May he rest in peace and may his family find comfort in a life well lived with many wonderful memories to look back on.
- Diane Tibbo
Very sorrow to hear of the passing of Ronnie , we worked together at Trenton works and shared a few good laughs. Everytime we would see each other we always had a good talk. Our condolences Robert & Bessie Simpson
- Robert Simpson
Sending our condolences to the family ,Ronnie was a very friendly man ,always smilin'.
- Deana Fraser
To the family my deepest condolences . Where would you find anyone nicer then Ronnie . Lots of fun darts at the 55 plus card and many conversations . He will be missed . Phyllis Weaver
- Phyllis Weaver
So sorry for your loss thinking of you all at this time. Ellen Harpell
- Ellen harpell
My thoughts to family and friends, Country Harbour will always hold many happy memories off Ronnie, I am reminded today off his kindness and humor ,big hug to everyone David Hayne Country Harbour
- David Hayne