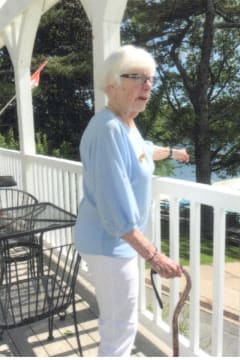 Betty Victoria Anderson, daughter of John Wesley Anderson and Mabel Matheson Anderson passed away peacefully at Camp Hill Veteran’s Building, Halifax, NS, on May 7, 2021 in her 99th year.
Betty was born in Halifax, NS, and spent her early years growing up on Birmingham Street and her summers spent at her grandparent’s farm at Chapman’s Settlement, NS. She attended Richmond and Morris Street Schools reaching a grade ten level and then studied bookkeeping and office management at the Maritime Business College. Upon graduation she accepted her first employment at Nova Scotia Light and Power for the princely sum of $45 per month.
During the early years of WW2, she volunteered with the Red Cross and was active in helping that organization tend to the needs of Service Personnel leaving for the War in Europe. In 1942 she enlisted in the RCAF (Women’s Division) and served in both Ottawa and Scoudouc, NB attaining the rank of Sergeant. Following discharge at the end of the War, Betty was employed as a stenographer with the Federal Government, working at various locations across Canada, including Vancouver, Edmonton, and Ottawa.
In 1952 Betty reenlisted in the RCAF (WD), and served on the Base at Goose Bay, NL, and later a posting in England, where she watched the Coronation Parade for our Queen Elizabeth and following, a short stint serving in France. Upon returning to Canada, Betty accepted a civilian posting in Ottawa and later transferred to Dartmouth where she was the Purchasing Officer at the Bedford Institute of Oceanography.
Upon here retirement she formed her own company and contracted her firm to the Halifax Shipyard during the CCGS Louis S. St-Laurent midlife refit.

During her retirement Betty spent many days beautifying her Flamingo Drive property, doing a bit of travelling around the Maritimes, playing bridge with friends, and practicing her Tai Chi, which she loved.
In 2020 Betty moved to Camp Hill Veteran’s Building, Halifax. She much enjoyed the company of fellow Vet’s, BL, Maurice, and Ray. Thanks to all for the wonderful care given to Betty while she was a resident.
Betty leaves to mourn her sister, Joyce Bowles and nephew David Bowles and family, all of Toronto, Ont., and many, many friends, and colleagues.
Due to Covid-19 restrictions, and as per Betty’s request, there will be no formal service. Her remains will be laid to rest alongside her Dear Mother at the Pleasant Hills Cemetery, Sackville, NS.

I've only just learned of Betty's passing last month. I'm so terribly sad that Covid prevented visiting her these many months. I first met Betty in the early 1980s when she and my mother Ruth, along with many other ladies, began to work on the R.C.A.F. (W.D.) reunion in Halifax in July of 1983. From that moment on Betty was like a member of my family. She and my mother spent most Saturday nights and every New Year's Eve together until mom passed in 2009. I have so many memories of Betty but I'll mention just one .... her famous carrot cake. Sweet peace lovely lady.
- Mary Noseworthy
I met Betty at Caritas assisted living facility and enjoyed our conversations and getting to know her. She was a great person and we kept in touch with phone talks after she moved to Camp Hill. My thoughts are with you . I do remember a friend called Gordon , that she was close to and would appreciate hearing from him if he could call me. Phone number 902-477-4542. Anne Powell
- Anne Powell
We first met Betty when she moved to Flamingo Drive. We soon became fast friends. We were so sorry to hear of her passing. I tried to speak to her every couple of weeks and had the pleasure of having a conversation with her the week before she passed. Our children called her Aunt Betty and our youngest Joe spent time with her. My husband even built a boat in her basement. She was very patient and put up with the noise and fiberglas smell. We spent many evenings drinking coffee and wine. My condolences to her family and friends.
- Norine Coops
I knew Betty through her longtime friend, Margaret Dingley, who passed away in Halifax in mid-January 2021. I visited her in the Veteran's building between COVID's 1st and 2nd waves, and we were so pleased she was able to join Margaret Dingley's online Zoom wake (with a little help from VMH staff member), she contributed her perspective on their long friendship that started at the swimming pool at The Waegwoltic Club in Halifax 40 years ago. She enjoyed the online session and everyone enjoyed "meeting" her. A meaningful life, well-lived. - Laura Ballem, Halifax, NS
- Laura Ballem
Our deepest sympathy to Betty's family and dear friends. Betty was a very spirited and interesting woman. My husband and I both worked at DFO/BIO for many years and had the pleasure of knowing Betty in a professional capacity. She was an exact task master and so very capable of getting things done correctly. Her background was so varied and she had a tremendous mind for the details that were necessary to get things moving and completed. In her retirement years she also volunteered at the BIO - 'Memory Store'. She was always gracious and willing to tell her story and also ask about yours. God Rest Her Soul - Peace and Joy are hers eternally. Hans & Dianne LeJeune
- Hans & Dianne LeJeune

Betty was a friend of many years practicing Tai Chi together (sometimes as a learner from Betty' s so accurate and detailed teaching). We enjoyed many afternoons at the Waegwoltic Club where Betty enjoyed swimming and having lunch. My deep condolences to the family.
- Christina Corkett

Betty was a great inspiration for me well working as my Sonographer at Halifax shipyard she kept me on the straight and narrow and took me to task when it was required which was most of the time i looked up to her For guidance continually I did contract for for her at DO and we got along famously she was a very nice lady and was highly respected I remain Rudy Lauzon Lcdr Retd Contract administrator at DSS
- Rudy Lauzon
My condolences to family and friends of Betty. Being in the marine industry for 52 years, I met Betty as a young man and was very impressed in her professional and respectful manner in conducting business. What first appeared as a tough person to barter with it not take long to find out she had a heart of gold. I had the greatest respect for Betty and she taught me some very good lessons in life. Rest in peace Betty!
- Michael S Parsons
Condolances to Betty's family and her friends.Betty was a wonderful lady i had the pleasure of knowing for the last 45 years.I met her when i syarted doing her hair at Simpson's salon in Halifax we quickley became friends and I enjoyed Betty's friendship so much,I will miss our conversations,and listening to her stories .Rest in peace Dear Betty I will miss you very much .
- Vickie Goodyer
I have known Betty my entire life, she moved into her house on Flamingo the day before I was born. She was an important person in my life. She had trees planted in her backyard for each of us, Always has special treats for Halloween for my children. I had the pleasure of working with Betty at the Shipyards during the Louis refit. I enjoyed listening to her stories on Christmas eve. she was one of the most incredible women that I had the pleasure to know. My deepest sympathies to her family. Angela (MacDonald) Comeau
- Angela Comeau
I was sad to read of Betty's passing, but what a life she had! She was a very interesting lady. She was my father's assistant at BIO in the purchasing department, plus we lived in the same neighbourhood, so I've known her for many years. My sincere condolences to her family.
- Diane Tomes-Low

My sincere condolences to the family of Betty. I knew Betty through Tai Chi when I used to go to the Tai Chi facility on South Park. So sorry to hear of her passing.
- Barbara Mitts-Cormier