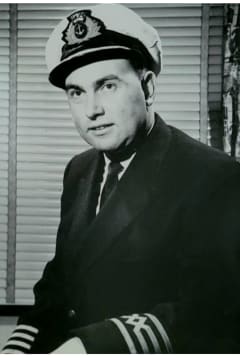 It is with profound sadness that we announce the death of Captain Thomas Sellers, a proud Ulsterman, who died on 11 August 2021 at the age of 88.
Tom (Paddy to some) was born in Belfast, Northern Ireland in August of 1933 the son of the late Margaret (Kenning) and Thomas Sellers.
He is survived by sons Mark (Jill) Sheffield, England, David (Linda) Ottawa and daughter Alison (Rodney) Wellington and seven grandchildren and two great-grandchildren. He was predeceased by his wife June (Watterson) and sister Yvonne McKelvey.
Tom grew up in Belfast and attended the Royal Belfast Academical Institution where he excelled academically and represented the swimming and rugby teams. He was a lifelong rugby union fan and took a particular interest in the Irish team. He was also a member of the 62nd Belfast Scout Troop.
After leaving school in 1950, Tom signed on as an apprentice with the Head Line (Ulster Steamship Co., Ltd.) winning the Thomas Gray Memorial Medal along the way. He progressed through all ranks attaining his Master’s ticket and Extra Master’s Certificate of Competency in 1960. He sailed to Baltic and Mediterranean ports but more frequently he sailed across the Atlantic Ocean. He won the J.L. Hudson Trophy as Master of the S.S. Carrigan Head, the first foreign cargo ship to dock at Detroit Harbour in the 1967 season. She was also the first ship into Chicago and the whole voyage was featured on a BBC documentary entitled “Westbound on E Track”.
In 1969 Tom left the Head Line and took up an interim position as Deputy Harbour Master with the Belfast Harbour Commissioners. The next year he crossed the water to Lowestoft, England and was appointed Marine Superintendent with the Ministry of Agriculture Fisheries and Food (MAFF). He remained in this position until 1982 supervising a fleet of seven fisheries research vessels.
Having missed out on the opportunity for further education due to his seagoing career, Tom embarked on a degree programme through the Open University in 1971. He was awarded a Bachelor of Arts degree in mathematics with first class honours in 1978.
In 1982 Tom made the decision to emigrate to Canada and took up the position of Marine Superintendent with Brunterm Ltd in Saint John, NB. He was able to reconnect with several Head Line friends and spent a happy six years before once again moving, this time to his final employment as Director of Operations for the Atlantic Pilotage Authority until he retired in 1998.
Professionally, Tom was a member of the Royal Institute of Navigation, a livery member of the Honourable Company of Master Mariners, and was granted the Freedom of the City of London with this latter organization.
In retirement he travelled with June but also gave freely of his time to many charities and societies; The Royal Commonwealth Society, Probus, St. Paul’s Home, St. George’s hot meals to name but a few. His volunteer activities were rewarded with the award of Her Majesty the Queen’s Diamond Jubilee Medal in 2012. A man of deep faith, Tom was a long standing parishioner of St. Paul’s Anglican Church and held several key positions within this church.
A memorial service will be held at 11a.m. on Tuesday, 31 August 2021 at St. Paul’s Anglican Church, Halifax. In lieu of flowers, donations can be made to the Victorian Order of Nurses, St. Paul’s Anglican Church or a charity of your choice.