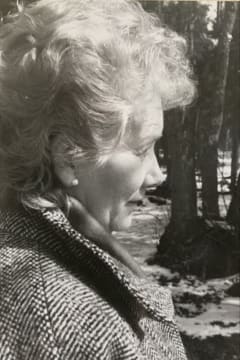 We are deeply saddened to announce the passing of our beautiful mother, Elizabeth Jean Wells, on Sunday April 25, 2021 in Dartmouth.
Daughter of the late Mildred (Dobson) and Robert Fogarty of Hazel Hill, Guysborough County, Nova Scotia, Betty loved growing up in Hazel Hill where she spent her summers on the ball field and her winters skating on the front lake. She often spoke of simpler times - going outside to pick berries from their field for dessert, and of joyful times spent singing in Bernard Henry’s Christmas concerts. People who were present still remember her beautiful rendition of How Great Thou Art.
After high school Betty taught school for a year in Half Island Cove, then moved with her sister Pat to Halifax where she met her husband Eric. Eric was in the Navy and they ultimately settled in Dartmouth where they began their passion for walking in Shubie Park, which they enjoyed for over 30 years and Betty continued with her daughters after Eric’s passing. Betty was full of fun and mischief and would do almost anything for a laugh. She was a lover of life and brought joy to all who knew her. She had a passion for current affairs and would talk politics with anyone who would listen. Over the years Betty crafted beautiful quilts, knit many warm and cozy thrum mittens and sewed a variety of clothing and curtains. In earlier years she was a curler, bowler and loved to frequent the bingo hall with her best friend Solange. Betty was the ultimate hostess and family gatherings always took place in her home. She worked tirelessly to provide the best of everything for those she loved. Her spaghetti sauce is the best ever. Betty was a lover of Friday’s lexicon and would involve the whole family for fun.
Betty is survived by her children Marina (Doug) and Donna. She was adored and will be dearly missed by her five grandchildren Erin, Tim, Sarah, Matthew and Zac. Betty is also survived by her sister Patricia (Ed), her uncle Bill (Mayola), nieces Gail (Mike) and Cindy (Joe), and nephews Robert (Yolanda), Billy and Steve (Marta). Predeceased by husband, parents and brothers Basil (Laura) and Bob. Betty will be fondly remembered by her lifetime friends and extended family that stretch over Nova Scotia, Newfoundland, Ontario and British Columbia.

Dear Marina, Doug and family (and Donna), My deepest sympathies on the passing of your dear mother (mother-in-law, grandmother). I remember Mrs. Wells welcoming me into the home (weekly, was it?) those many years ago so that Marina and I could prepare lessons for our shared Sunday School class. She was a real sweetheart (as was your father). You surely will miss her. -with love, Jane
- Jane Osborne
I'm saddened to read of Elizabeth's passing. To all her family, please accept my condolences for your profound loss. My connection is through the walking trails of Shubie Park. Our walking routes were in opposite directions on basically the same route. As a result, our paths crossed frequently (daily at times). Elizabeth was a gracious lady who always had a friendly greeting, and smile! Her mischievous side, became obvious anytime that we stopped to chat. During one chat she mentioned that she was originally from a small community named Hazel Hill, that I had probably never heard of. To her surprise, I knew of and had actually driven through Hazel Hill a couple of times, when visiting my grandparents. My mom was born and brought up in Seal Harbour, not to far away from Hazel Hill. I believe that Guysborough County connection made our meetings more meaningful to each of us. I looked forward to meeting her on my walks. Memories of a beautiful lady, that will remain with me always. Dave
- Dave Kaiser
My condolences and sympathy ,Donna and your families on the the loss of your mother.
- Alan MacDonald