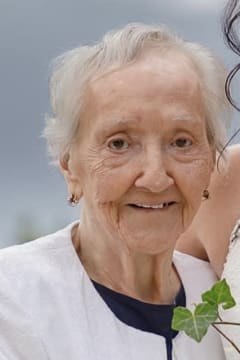 Our dear Frankie passed away on July 28th, 2022 at the age of 96. She was born in Antigonish on June 22, 1926 to John Angus MacIsaac (South River) and Georgina (Robertson) (Aberdeen, Scotland). She trained as a hairdresser and continued her career during her marriage while bringing up her 3 children being a very early “working from home” Mother. Many women in Fairview knew her well. Frankie was predeceased by husband Omer Pellerin, daughter Barbara McInnis , son Robert, sisters Sarah Catherine (Kaye Shaw), Violet (Danenberg), Ruby (Cameron) and brother Harry Skeet. She is survived by son Hughie Pellerin (Paula O’Sullivan), son-in-law Calvin McInnis grandchildren, Ian (Kathleen) and Corrie McInnis (Kaylynn), great grandchildren Violet and Cole McInnis and many nieces and nephews who were proud to call her Auntie. Frankie had a love of cooking throughout her life and brought amazing dishes to her table. She had a flair and creativity with food that was the envy of many and could challenge even Bobby Flay. Her “hot sauce” recipe was known far and wide. Many in the family were privy to her cooking “secrets” and her recipes. Frankie, as Matriarch, could always be called upon for her wise advice while making sure that her flock were going in the right direction. After almost 100 years of life, she could analyse the past, but , being a progressive woman, always lived toward the future (a woman ahead of her time). She will be greatly missed. Another light has gone out in our family.