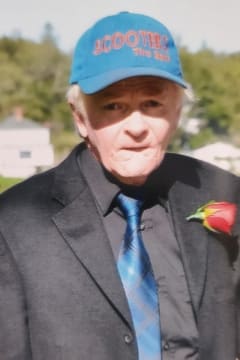 It is with heartfelt sadness that we announce the passing of Mark William Charles Lewis, age 64, on May 6th, 2021. He was born in Ontario but moved to Halifax when he was 18 after basic training in the Royal Canadian Armed Forces. He was a loving and caring husband, father, grandfather, and friend. He was a proud member of the Royal Canadian Navy for 8 years until the entrepreneurial spirit came out and for the rest of his working career was his own boss. He had a great love of horses and spend many years riding, coaching and training until he moved from 4-legged horsepower to 4 tire horsepower and loved re-entering the drag racing scene that he enjoyed as a teenager.

His love of horses was passed on to his children who rode and showed for years and his daughter Brandy has carried on with her own farm. His son Joshua wanted to learn about racing, so the next thing you knew there was a race car in yard. The Nova Scotia Drag Racing community welcomed us with open arms and have enjoyed many years racing and his love of all thing with power will live on in his children and with any luck there will be a new member when she is old enough to enjoy both riding and racing.

He is survived by his wife Angela (Henderson) son Joshua (Melanie) daughter Brandy, (Bryce Munroe) and Granddaughter Wynter, sister Shirley and sister Gail and second father figure to Daniel (Wall) He was predeceased by his father Willian (Bill) mother Frances and brother Jim. Cremation has taken place and no service is planned.

No flowers please any donation to be made to the Veterans Association or a local animal shelter.

I have the greatest pleasure to call Mark my friend. We sailed together many years ago on HMCS Saguenay. He was the best man at my wedding and also godfather to my son. Although we did not stay close over the years and only got back in touch not so long ago I often thought of him. I have many fond and funny memories of our time sailing together. He will be sadly missed. Our condolences go out to Angela and the family. Our thoughts and prayers are with you. Rest in peace, my friend. David and Debbie Wilton.
- David and Debbie Wilton
not sure where to start. so i shall end quickly Mark and my husband Harrison and myself bonded over the training of our horses some 17 years ago. we have been friends ever since, I miss the friendship there, but Angela and I will carry it on. Love you guys, Tricia
- tricia codner
We were saddened to read of Mark's passing. Our thoughts and prayers go out to Angela and family at this sad time. Treasure your many happy memories. Love Uncle David and Aunt Lina
- Dave Henderson
So sorry for ur loss Angela, Brandy n Josh. I have wonderful memories of Mark training Springer and all of u working so hard to bring him along in the show ring. My deepest sympathy n love is sent ur way. A life time friendship began. He was an amazing horseman so knowledgeable n kind. Although we lost touch over the years - will always remember Mark's smile ❤️ The world has lost a wonderful man. Sending hugs - n prayers - Jess
- Jessie MacDonald
Angela, Josh, Daniel and families. So sorry for your loss, he fought a long hard battle. He will be missed by all of his friends at the track for sure. Our deepest sympathy to you all. Rod & Michael
- Rod Golden
It has been many years since our paths have crossed and we are saddened to hear about Mark. Our heartfelt prayers and sympathy go out to your family. Adam and Josh share many great childhood memories. A parade in one of Mark's cars comes to mind.
- The Boutiliers'
Mark was not only his family's patriarch, but instrumental in the operation of the family business, as well as the "head Honcho" of the Scooters Racing team. He was truly a unique individual and a great friend. It was always a good weekend when the "Scooters" team arrived at the track, and Mark enjoyed the crew chief position, keeping the multiple racers on track for the event. His "bucket list" funny car project seemed to be the highlight of his racing enterprise, and he really enjoyed watching the car compete with either Josh or D.J. at the controls. Our condolences to Angela and the family for their loss. Our thoughts and prayers go out to you all. Berny & Joan
- Berny Corscadden
I had the great fortune to sail with Mark on HMCS Saguenay. He was a great friend and good all around stoker. He will be missed. My family is thinking about you and yours during these hard times Wayne Rose aka Rosey
- Wayne Rose