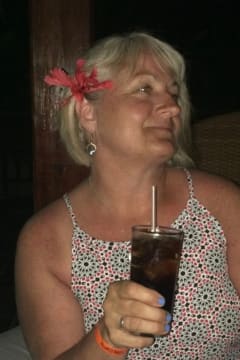 Passed away peacefully on April 24, 2021 at the Halifax Infirmary with her husband Bruce, and her mother, Marie Leppard, by her side.

Wendy was born in London, Ontario and moved to Nova Scotia with her family in 1980. 1983 proved to be a life changing year when they moved to Milford, Nova Scotia. There Wendy met Bruce, the love of her life, and they married in 1988. A few years later they happily welcomed their son, Chris.

After working at the IWK in Radiology for 15 years Wendy decided to venture out on her own and began a career in the music industry. She started by designing websites and her skills and business grew. She worked with many East Coast artists, and she and Bruce shared many events with friends and artists, many of whom became good friends. She worked with so many great people, including Sons of Maxwell, Lennie Gallant, Dave Gunning, George Canyon, Bruce Guthro and helped many others when they were starting out. We know there are so many others she worked with that she cared very much about.

Wendy enjoyed the beach - her happy place. She and Bruce and Chris travelled many times to to California to spend time with their great friend, Kelly Erwin, taking side trips and beach vacations. Wendy and Bruce also went to the beach in the Dominican, and when they weren’t travelling, they could be found on one of the many beaches in Nova Scotia.

Just over two years ago she returned to the IWK in the ENT Department. She quickly fit in and demonstrated why she’d been so successful in her own business, and made some very good friends, especially Traci, Lynn and Barb.

A special thank you to Dr. Bruce Colwell and his team in Oncology; the EMTs who came to the house; the incredible staff in Emergency who cared for Wendy and her family; and the staff on Unit 8.1 of the Halifax Infirmary, who took such great care of Wendy and her family.

If you wish to make a donation in her name please consider the Canadian Cancer Society or any charity of your choice.