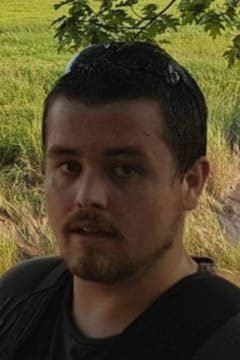 It is with heavy hearts that we share of the sudden passing of Ben on December 3rd, 2020.

If you were lucky enough to be allowed into his circle; you knew you had someone who was always going to look out for you and be willing to fight for you; even if it had to be physically. There was never a topic he didn't have an opinion and answer for, and would find joy with arguing his point with you until you either caved and agreed or gave up.

Ben loved animals but was somewhat of a cat whisperer and definitely would be willing to take any and all cats that he came across home with him; it happened more than once. He loved to work with his hands; helping with yard work, building things, pulling things apart and putting them back together or just leaving them apart, and even spending hours putting his nephew's IKEA kitchen together. One thing he loved was to experiment with food, from an early age he was sharing his crazy concoctions, and definitely ready to challenge people on eating spicy things alongside him.

Ben didn't always share his feelings outright, but from the things he would do for others you always knew how he felt about you, there was no hiding that. If he ever had a story to share with you though, hopefully you did not have anything planned because it was going to take a bit to hear it right to the end; but he was certainly one heck of a story teller. His favorite spot was his family's camp that provided some quiet and solitude, it was his place to decompress and give himself space. His little bit of paradise.

It is encouraged that those who knew him continue to share stories and memories on his Facebook for all to see; as we are sure those already shared are of no surprise to just what kind of person he was. He was a smart ass, tough, helpful, troublemaker, love deeply kind of guy and is going to be missed beyond any type of measure. So, we ask that anytime you're sharing in a drink or a puff; whether on a holiday, special occasion or any day that ends in "y" have one for Ben; because you know he would have been first in line to take one himself.

Celebration of life is in the planning stages right now due to restrictions. I will notify of plans as they progress.

Kim I can't imagine the pain you must be feeling. I remember Ben well from the summer I took care of him. He was a delight! He was such a sweet child and no trouble at all. I hope your memories bring you comfort.
- Paula Pompa
Kim, my thoughts and prayers are with you at this difficult time. I remember I hired him once and I always thought he was a kind and gentle fellow. I will keep you in my prayers. Steve England
- Stephen England