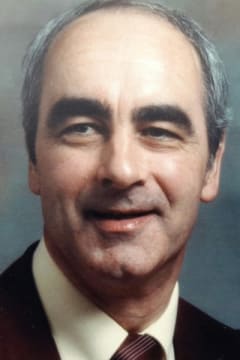 With sad hearts we announce the passing of David Gilbert (1939-2021) on February 11 in Halifax. Formerly from Sydney Mines, Nova Scotia, David was the dear son of Margaret (Lamond) and William Gilbert.

With his outgoing personality, David was always ready for a chat, which served him especially well in his work. He started his career as a butcher in the British Canadian Coop, Sydney Mines, moved on to open his own Meat Market in Dartmouth, and later was employed by various Grocery Chains in the Halifax area. For a time he worked in car sales and made lifelong friends wherever work took him.

David enjoyed music, singing and dancing in his spare time. As a teenager he was a member of the Clyde Ave. Baptist Church Choir in his hometown.

David leaves behind two sons, Scott, Langley, B.C, and Tim (Krista), Coalhurst, Alberta, along with a beautiful granddaughter, Madison. He was a special brother to Bob (Tyra), and sisters Betty Ann MacIntyre (David) and Donna Lee Murray. He is survived by June Broyden, his kind and supportive friend and several nieces and nephews.

A funeral service will be held in Sydney Mines at a later date. Memorial donations may be made to Clyde Ave. Baptist Church, 30 King Street, Sydney Mines, NS B1V 2E5, or charity of choice.

Safe in the arms of Jesus,
Safe on His gentle breast,
There by His love o'er shaded,
Sweetly my soul shall rest.

So sorrow to hear of Dave's passing i meet Dave for first buying a car from him at Bob McDonalds then after that at the Newfoundland Club where me and Mona would chat with June and Dave he will be greatly miss so sorrow for your loss June . We have the same last name but weren't related .
- Ray Gilbert
Dave was one of my great friends. I will remember him as a kind and caring man. May you RIP Dave😪
- Tyler Arsenault
Our thoughts and prayers go out to the family at this difficult time. Dale and Ches Carter
- Dale Carter
Worked with Dave at bob mcdonalds chev olds very nice guy to have known sorry for your loss xx oo
- Carl firth
Our thoughts and prayers are with you and yours in your time of sorrow!! Take care and God Bless!! Hugs, June!!
- Vivian Cooper