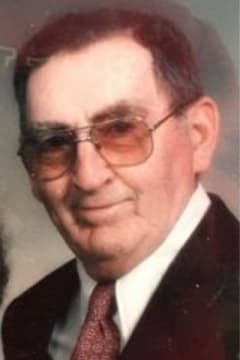 MORASH, Edward Stuart, Age 94, passed away peacefully at the Dartmouth General Hospital on February 9, 2021, of cancer. He has left behind a large and loving family, who were with him (two per each day) in his last months. Edward is survived by his son Wayne Morash, with whom he lived, daughter Susanna Morash-Kent (Roger), 6 grandchildren-Aaron Conrad (Laura), Faith Christie (Fraser), Naomi, Sofia and Jacob Kent, Donovan MacDonald, 2 great-grand daughters who were the light of his life, Katie Christie and Amelia Conrad and a grandson-to-be (March 2021). He is also survived by two sisters-in-law, Muriel Morash and Bona Hayward, along with many nieces, nephews and friends. He was predeceased by his parents Sydney (Pearl Cribby) Morash, his loving wife Phyllis Morash (Hayward), brothers and sisters-in law, Harold (Betty), William (Norma), Allison, and sister Verley (Dave), nephew Howard, niece Helen. He is the last surviving member of his immediate family.

Dad lived a wonderful life and he was loved. This obituary touches only a small part of who was this man, our precious father, grandfather, and great-grandfather.

He was a self-taught, gifted musician, who could play something on anything, He also had “perfect pitch” which allowed him to tune everyone’s instruments. He was however, skilled at playing the guitar (electric too) and dobro, and played in a band for many years. Kitchen parties were common in our house where all manner of persons gathered together to sing along with Mom’s hand written songbooks as he played the guitar into the night. His daughter remembers visiting his friends and singing songs with him when she was 3, and sometimes he woke her up in the middle of the night to play piano tunes! He brought music into all of our lives and his left a legacy of children and grandchildren who play various instruments and sing. The saddest thing was that Dad lost his hearing in his 80’s and had to give up his music.

Dad had to quit school in Grade 8. His 3 brothers went off to war. He was the youngest and stayed home to help his father farm in Cole Harbour. At night, he helped other farmers sow and reap their crops and in winter worked on the highways. His first real paying job was delivering for the Co-op in Woodside (and that is where he met and fell in love with Phyllis with whom he was married for 56 years). Following this he worked for 40 years with Dartmouth Fuels Limited and retired when he was in his 60’s. His work ethic is an example for all of us to achieve. Dad and Mum enjoyed many retired years together before Mum broke her right shoulder. Dad devotedly tended her until her death in 2014 and brought her mayflowers every spring. Ironically, Dad’s last visit to the hospital was also because of a broken right shoulder.

Dad was a creative man who sorely missed a science education. There was nothing he couldn’t rig up. He created night lights from car batteries, a funnel from the roof so we could collect water, fixed a myriad of cars which he helped us all buy, made his own brew (possibly not legally), and made us the best tricycles, bicycles and scooters from the county dump. He could also hook a rug (learned from his Mom) and sew and darn. He converted an old milk truck into a camper with seats, a fold down table, lots of lights and plenty of room to sleep. When he was 90 he got his first tablet and became quite skilled at checking the weather and reading messages we sent him. His fingers were however, too big for typing. He had big hands. Farmer hands.

Our family holiday always involved camping. At first it was in a tent, then a tent trailer, a converted milk truck and finally a motor home. Our parents never wanted to have a holiday without us; it was clear they enjoyed their children. We spent many happy hours at Wentworth Provincial Park (including in the 70’s during hurricane Beth) where we swam, fished, played cards, played mini-golf, badminton and catch, sang around the campfire (with Stella the guitar he obtained from saving up IGA Gold Bond Stamps) and made friends with the park rangers. We took many sight-seeing trips and explored. We camped all over Nova Scotia, and PEI and had one hilarious trip to Maine. Everyone waved at us and thought our converted van was a chip truck, especially when Mom would make her delicious steak dinners while we were waiting in the long lineups for the PEI ferry.

We always had a garden, as his home as built on original family farm land. His daughter loved snapping beans on the back porch and listening to stories. She spent a lot of time weeding too. Into his 90’s Dad continued to plant and reap his veggies. He always had a year worth of potatoes, beans, swiss chard, carrots, tomatoes and cukes. In his last year, when he was ill, we planted the garden so he could continue to work in it, and he canned many veggies for all of us, while teaching us how to plant properly (apparently we didn’t do it right-but we knew how to weed). We plan on continuing this tradition and getting it right.

Dad was an amazing cook. His children will always remember his amazing Sunday suppers of steak or his fried chicken. Even his kraft dinner tased better, and of course there was the never ending mashed potatoes.

Dad was perhaps a little accident-prone. He liked to take chances and had a high threshold for pain. At an early age he hacked his knee with an axe. He broke his wedding ring finger when he slipped and fell while loading the tank of his Dartmouth Fuels truck. He had a snowmobile accident which resulted in 60 + stiches in his head because the throttle stuck open. He stuck his finger in a snowblower and lost a portion of it. He lost 2/3 of his stomach to ulcers and nearly died in 1976. Life was an adventure. What a miracle he made it to 94!

Dad was kind and generous. He loaned money to co-workers and rarely got it back. He gave to many charities including his children and grandchildren. He always said that he left his car doors unlocked because if someone needed something from his car, they needed it more than he did. He never made more than 10,000 a year in his lifetime, but we always had everything we needed. Our favourite story of Dad is when he found a hundred dollar bill in the parking lot behind Kmart. It was the 70’s so it was a lot of money. He waited until he saw someone drive up and start desperately looking for it, and then he got out of the car and gave it to them. Sometimes he was a bit careless. He had his work money on a belt and lost it while skidooing. While Mum freaked out, Wayne and I went toboganning on the hill and Wayne found it in a lump of snow. God’s way of thanking him for years of generosity! Dad was always trying to give us all money, exclaiming “What do I need it for?” He often put it in our pockets or waited until we were leaving to thrust it upon us. For all of us he was a God-send.

Dad was a faithful Anglican. He attended Saint Andrew’s Anglican church in Cole Harbour for most of his life, moving to the Church of the Holy Spirit in the 1980’s. At Saint Andrew, he sat in the front right pew so that Mom (in the choir) could watch us all. He was often up late delivering oil on a Saturday night, so we had to make sure he didn’t fall asleep during kneel down prayers or snore, which he did loudly. His pocket was always filled with peppermints which he slipped to us when he thought Mom wasn’t looking. He always shined up the car for Sunday church-you must put your best foot forward for God. He sang in the choir for many years. In later years he attended the early morning service at Holy Spirit when he could.

There are so many people to appreciate. As Dad came to the end of his life, my brother Wayne continued to share his home to assist in any way he could-the wood stove was always kept burning to keep him warm. Grand-daughter Faith and son-in-law Fraser made him all the meals he loved, like mashed potatoes and gravy and apple sauce and Spaghetti pie, and fudge, and brought Katie to visit which always made him smile. Roger and Susanna took care of finances, doctors appointments, medicine and getting any supplies he needed and maybe added a turkey dinner and an apple pie or two. Grand-daughter Naomi painted his house. All the grandchildren, and great-grandchildren spent time with him on a weekly basis. Donovan, and all Susanna’s children, always had the best snacks of popcorn, ice cream and cheese. In his last months, Wayne, Faith, Susanna, Roger, Aaron, Naomi, Katie were his care team, visiting him each day so he was not alone and bringing him such contraband as the salt shaker. He loved the nurses at the Dartmouth General, especially Danielle, Maranyl and Jason and his entire care team. They called him Farmer Ed. Thank you to all the people who sent loving prayers and hugs to him.

A celebration of this blessed life will take place February 27, 2021, 2 pm at the Church of the Holy Spirit, Dartmouth, Rev. Shirley Carras officiating (all Covid protocols to be followed). Family flowers only. Interment in spring at the Church of Saint Andrew’s Cemetery, the original Morash family graveyard. We might even have a kitchen party singing the old songs then. Donations may be made to the charity of choice, as Dad in his immense generosity, gave to them all.

Our deepest condolences to the family Cole Harbour has lost a great team in your mother and father .They were a pillar of strength to the community .Your father and mine played lots of music together and your mother taught lots of girls in Cole Harbour to knit .They will surely be missed
- Carole Elliott
our deepest condolences to you and your family . Your father sounds like he was a wonderful man like my dad was. Art wants me to pass on his sympathy for your loss also . You have wonderful memories to help you through this difficult time .
- Karen Doherty
What a lovely tribute to your Father, Susanna. He was obviously a lovely man. My condolences to all who knew and loved him. My condolences to all of his family and friends.
- Cindy McAllister
I grew up in Cole Harbour and knew Eddie .... just because everybody knew everybody in that small community. My brother, Art Walsh and my husband., Mike Atwell worked with Eddie at Dartmouth Fuels. He was a fine man and it certainly shows in the lovely obituary that I'm sure you all spent time preparing. You shared many great memories and I suspect you had fun, a few laughs and probably shed a few tears while taking care of this task. He would be proud. My thoughts are with you during this difficult time. He will be missed.
- Louise Atwell