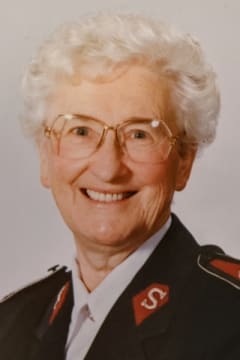 Evelyn passed to her eternal reward from Halifax, NS on December 26, 2020.

Evelyn went into the Salvation Army Training College to become an Officer from the West Victoria Corps. As a member of the Kings Messengers session she was commissioned on June 6, l948 with the rank of Lieutenant. (Incredibly, 3 of the 4 Hammond children became Salvation Army officers!)

She went on to serve various roles in Ontario and Quebec, before serving briefly at Territorial Headquarters (THQ) Property and Finance and youth departments., and assistant Field Secretary. She served at THQ and Newfoundland Training Colleges four times, and in 1952, she was appointed to the Territorial Team of Evangelists. Evelyn also served in the Women Social Department at Halifax Grace Hospital and Vancouver Maywood Home in Vancouver B.C and Winnipeg Bethany Home. Before retiring, Evelyn became the Territorial Home League Secretary

She continued a life of service in her beloved Vancouver and worked at the Salvation Army Recycle Centres and Thrift Stores. While working there she met and fell in love with Gerald Haggett. They married in 1993, and continued working with the Recycling and Thrift Stores, including time in Winnipeg and Toronto. During this time, they also enjoyed travelling throughout North America, especially to locations promising some sunshine.

In 2000, Evelyn and Gerald relocated to Halifax, where Allan and Jeffry lived, and her grandson Doran. In the 20 years that they lived in Halifax; they were active in the Salvation Army Halifax Citadel Community Church. The family enjoyed Sunday lunches after church and a big weekly dinner every Thursday. Evelyn loved cooking and entertaining for "the boys," and valued time together as a family.

Every couple of years, Evelyn and Gerald would spend time with Pam's family by either flying to Sydney, or the Australians visiting Canada. She loved Pam, her husband, Terry, the grandkids (Paul and Brianne), their partners (Michelle and Chris), and the great-grandkids (Layla, Sam, Rosie and Ellie).

Evelyn grew into a beautiful and gifted Salvation Army officer who used her gifts passionately to serve her Lord and Savior - touching the lives of countless people throughout her ministry. She had a marvellous gift of making music come to life and was an accomplished pianist. While stationed at the Training College, she took a great interest in teaching cadets how to play the piano. She was kind, hospitable, gifted, passionate and lots of fun. We remember her as a devoted wife, great stepmom and a loving sister. We will miss her greatly.
A service will be held to celebrate Evelyn’s life in the coming weeks when the COVID-19 guidelines have determined it is safer for people to gather. More information will be shared when details are finalized.

A special thank you is extended to all those who cared for Evelyn in her final months, especially friends who visited and the team at Parkstone Enhanced Care. 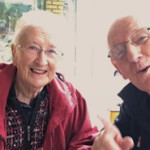 Evelyn and I met when she was on the staff of the Training College in Toronto and I was a cadet. She had a gentle impact on my life by her gracious spirit. She was such an encouragement. She made our New Testament classes come alive. It was always a joy to be in her 'brigade' and she took the time to give me a few organ lessons. Her cheery voice and her laugh still ring in my ears and I so appreciated her piano playing. We never lived near each other so my last visit with Evelyn was in Winnipeg in 1971. It was such a joy to spend time with her again. I will always remember her as a very gracious lady who shone for Jesus, had the most positive outlook on life and had the gift of encouragement. I will forever be grateful for her influence in my life which continues to this day. I am grateful to God for bringing her into my life. I am a better person because of her. To the family, may God bless you with His comfort, His presence, and His peace.
- Irene Ward
When I was a young child, I met Evelyn after a particular wonderful answer to prayer in my family's life. Evelyn was instrumental in leading my father Albert back to the Lord. As a result, a few years later my parents entered into full time officership. My father had had a calling into service many years before but with war service interrupting his plan, his call was put on hold. He lost his way for several years but because of the prayers of many he found his way back to God through the ministry of the cadets and Evelyn. Evelyn remained a close and dear friend to our family. On a trip out to Victoria for my parents 50th wedding anniversary, she joined myself, my aunt, and another dear friend Helen for a cruise to Alaska. What a great time we had. Evelyn was a great inspiration to me. I was able to visit with her in Vancouver on a few occasions when she moved back to BC after her retirement. My last get together with her and Gerald was five years ago in Halifax. Had lunch together at the Pier. It was a joyful reunion. My sympathy goes out to all her remaining family. Ev you are with all the angels now. I shall be forever grateful to you.
- Sharon Ferris
Evelyn and I first met in the 1980's at the Scarborough Corps in Toronto. Our friendship flourished immediately and despite both of us still working, we spent many hours after work and on the weekends taking wonderful walks in the numerous parks in our City. We also took several memorable 'road trips' together, mostly within Ontario. Her faith was admirable as well as her commitment and sense of duty to serve. With her fabulous sense of humour always at the ready, she made our time together, precious and our friendship enduring. After 'Ev' married Gerrald and they moved 'down east' we stayed in touch via telephone, email and we only met face to face once after, here in Toronto for lunch. I am eternally grateful for her friendship, her example and her love. God Bless 'Ev'!
- Helen Peacocke
I am heartbroken. Lt. Col Evelyn was a true woman of God. She supported me when I first came to Fairview Citadel and when I was enrolled as a soldier, she stood with me. I took Bible studies with her and she had such a depth of knowledge of the Word and I was inspired by her knowledge and faith. May she rest well until the day our Lord brings us Home. God bless her.
- Paula Zwicker