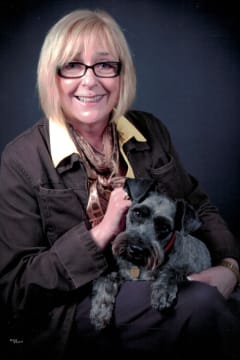 How does one describe my dearest friend Gail? She was totally loyal to her family, her blended family, her friends and her job. She had an infectious smile and laugh, she was vibrant, sweet, full of life, lively and genuine, a beautiful soul with a zest for life, she will be missed by many!

Family was first and foremost, father Nels, mother Gwen, brothers Perry and Dave, then her nephews and nieces by Perry and Sandy, then her great nephews by Jake, Tim and Saxon, Perry and Sandy's children. She was a champion for all of them, ever so proud of all their achievements. Her loyalty and sense of family no doubt came from Nels and Gwen. As a side note Nels and Gwen were like second parents to me. I was welcome at #1 Alcock no matter what time of the day or night it was. This friendship also allowed me to join the family when they visited Gail's Uncle Ross in Port de Grave NL. Between the Grimes' boat and my boat we spent many wonderful happy summers boating on Gander Lake and picnicking on the beach at 15 Mile Brook.

Back when Gail told her parents that she was moving out of her apartment in Dartmouth NS to move in with future husband Gord and his four children, Margaret, the youngest, was 12 at the time, then there were Colin, Jason and Sammy, her mother Gwen only had one comment: "Couldn't you find a minister and a church on the way from your place to Gord's?!" I still chuckle over Gwen's comment! Gail's 40th birthday was on Sunday, December 13, 1992 and she and Gord married 6 days later on Saturday, December 19, 1992. It took time but all of them became a blended family. All of a sudden at 40 Gail was a wife and a mother, a grandmother would come later with Sammy and Colin. She loved it. She had a new family to champion and championed them she did. Gail had asked me to give the toast to the bride at the wedding. I still laugh as I recall Gail and her maid-of-honour and BFF Bev huddling wondering what Gander stories I would let loose on the wedding guests. Gail lived 5 minutes from the McCarthy's and Bev lived next door to me and we were a pretty tight bunch. I kept it light and clean so they had no worries. It was at that time that I met Gord's parents Gord Sr and Dorothy (Dot). During my first sit-down with Dot I discovered that her father was a United Church Minister at the Cochrane Street United Church in St. John's NL. When I remarked to Dot that my mother Elsie's family lived on Cochrane Street her face lit up as she remarked: "We have two wonderful things in common, Cochrane Street and Gail!". I had many many great conversations with Dot over the years until her passing.

When Gail introduced herself to you and asked if you wanted to be her friend you most likely became a BFF. But whether you were a long time best friend, a casual acquaintance, a work acquaintance or someone she just met Gail made you feel welcomed immediately and with such grace that you thought you were her BFF. 59 years ago when Gail asked Bev if she wanted to be her friend they both became joined at the hip. Many schoolgirl sleepovers were standard, so were midnight horror movies at Gander's Cresent Theatre. Gail always said she and I met when she was 4 and I was 8. I was in a school concert that I can't recall but she and her family attended. I always asked if she remembered the night because of my performance or because her maternal grandfather Jake slammed the car door on her tiny 4 year-old hand, LOL I never did get an answer to that. But our friendship prevailed despite absent times. And until recently we celebrated our birthdays, our retirements, Gail and Gord's wedding anniversaries and of course Christmas and New Year's. When I required facial reconstruction surgery Gail drove me to the Halifax hospital and stayed with me until I was wheeled off, she picked me up two days later. When Gail required eye injections or chemo it was my turn to drive her to Halifax. We had many a frank discussion about cancer and treatments, both hers and mine. Being Gail's friend brought your and her immediate families into every discussion with genuine interest in every member. In a telephone call today [Monday, May 30, 2022] my caller Walt said "How could you not like Gail!" as we reminisced about our Gander and airlines days. How true my friends!

I recall when Gail found out she was accepted by Eastern Provincial Airways as a flight attendant, pardon the pun, but she was flying high that day. Her first day flying with Eastern Provincial Airways was Monday, January 29, 1973. Based in Halifax, Montreal, Toronto and Sydney Australia she enjoyed it all. It didn't hurt that she had some great roommates over those 25 years of in-flight service, they mentored her and she mentored them too. I had a great 2 hour phone call today [Monday, May 30, 2022] with her roommate Judy in Halifax and Montreal. Whether she was an in-charge or not on a flight she tackled the job with zest. She put her all into it to make sure her passengers were happy and satisfied with her service. With her fellow co-workers on a flight she gave respect to them and she certainly got their respect in return. Eastern Provincial Airways, Canadian Pacific Airlines, Canadian Airlines International and Air Canada carried her 25 years until her retirement.

It seemed that Gail, her brother Dave and I were joined at the hip when it came to enjoying ourselves whether it was in Gander or on some travel jaunt. I was reminded of this today [Monday, May 30, 2022] when I had an email from a retired Eastern Provincial Airways flight attendant, our dear friend Val from St. John's NL living in Sydney Australia. Haha, everytime Val saw us she called us "The 3 Musketeers of Gander"! Our travel jaunts saw the 3 of us in Barbados, Mexico, Greece and Egypt, Brazil, Puerto Rico, Hawaii plus others. Our 2 trips to Barbados saw at least 12+ Gander and/or airline people join us each trip. It was only recently at a cabin on the Northwest Gander River in Central Newfoundland that I found myself reminiscing about our second Barbados trip with a former Eastern Provincial Airways co-worker Doris and her husband Paul. Our first trip to Hawaii Waikiki had about 24+ Gander and/or airline people join us. We were also joined in Hawaii on one of our trips by Gail's brother Perry and his wife Sandy along with Gander friends Norma and Doris. When Gail was based in Sydney Australia with Canadian Pacific Airlines I planned 2 of my back-to-back annual trips to Hawaii to coincide with Gail's layovers in Honolulu. Mexico saw us in Acapulco with Gander friends Jim and Fabian. Brazil saw just the 3 of us in Rio where one night I got offered a job as an entertainer at a major hotel on the beach, but that's a whole other story. Greece saw us take a cruise out of Athens with Jean and Donna. We visited Alexandria and Cairo in Egypt and the Greek islands of Rhodes, Crete, Santorini and Mykonos. As Mykonos was our last cruise ship stop before Athens we disembarked and stayed an extra 3 weeks on the island. When the 5 of us exited the ship's tender to make our way to our hotel we were met by an elderly gentleman from the hotel. He took our bags placing them in a cart pulled by a donkey, a novelty to the 5 of us for sure. As we made our way up the hill from the landing quay the donkey needed our help so here we were dressed to the nines because we were airline employees helping this gentleman and his donkey as we pushed the cart up the hill. I can still picture this and hear the laughter! I could relate a million more stories of our travels but I won't. Needless to say these were wonderful times that "The 3 Musketeers of Gander" enjoyed immensely and the reminiscing has kept the laughs going right up until today.

When Gail's husband Gord asked me if I would put some words together to possibly be included on the Donald Walker Funeral Home website I spent some time thinking of my approach to this. No one wanted a newspaper style obituary, that wasn't mine to write. Gord knew how close Gail and I were. Donnie I met through Gail and Gord when I first moved to the Halifax area in 1988. Now there are some stories too that we'll leave for another time. As I started to write this I started to recall many memories piqued by phone calls from my brother Phil, Gail's BFF Bev along with Gail's roommate Judy and Gander friend Walt. Numerous emails included many Gander and Eastern Provincial Airways friends and my siblings Marie, Paul and Kev. Private Facebook messages and 100's of Facebook comments from so many gave me much inspiration. I appreciated every piece of correspondence and I know Gail would have appreciated them too. Thank you for this opportunity Gord and Donnie to write about my dear friend. While an Alcock Cresent Ganderite girl has moved on the memories sure remain. To my devoted friend my final words here: "Gail, do you know just how loved you were?".