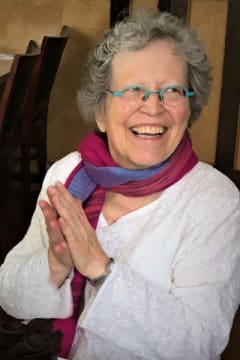 She is survived by her daughter Julia (Randy), grandchildren Nate and Taylor, step-grandchildren Ryan and Ashley, Co-grandmother Cheryl, brother Richard, Sister-in-law Jeanne, niece Zoe, nephew Ben (Charlotta), and her many dear friends who became her family.

Born in Manchester, New Hampshire, Marie was the oldest of four children. She attended Tufts University in Boston, and immigrated to Montreal in 1962 where she met her husband Hans Vandergraaf. Moving from downtown Montreal to New Ross Nova Scotia in 1975, Marie went from a big city, gallery going artist to rural farmer, and new mother overnight. She grew acres of organic fruits and vegetable, raised free range animals, chopped wood and shovelled snow. She made friends and embedded herself in a community so different from the one she came from.

Marie was a pioneer in many ways. She was an advocate of organic whole foods and green vegetables long before it was in fashion. She tirelessly researched health and alternative healing, especially in an effort to heal, and better herself. She was a wonderful cook and food was a huge focus in her life.

She was a gifted gardener whose urban wild space was well known in her Dartmouth neighbourhood. She was an active member in this community as head of the Harbourview Neighbourhood Association for many years and was a volunteer and supporter of the NDP.

Marie was a voracious reader and often had three books on the go at a time. She was a regular at both the Dartmouth and Halifax libraries. She was also an avid listener of the CBC, the soundtrack to much of her life. At 80, she was still an intellectual who loved stimulating discussion about a wide range of topics.

She found a spiritual home in Art of Living 20 years ago, and loved going to Kriya and Satsangs with her many friends. She took joy in meditating, chanting and dancing with this group.

As a professional artist, Marie experimented with a variety of media. Her work evolved through harsh black and white ink drawings in the early 1960’s, beautiful flowery oil paintings in the 70’s, watercolours of life on the farm, environmental and political statements in painting as she protested uranium mining and other environmental issues. In 1986 Marie moved to Dartmouth as a single mother and bravely went back to school at NSCAD at the age of 47, attaining her BFA in 1988. She found another community there, and began printmaking, and later sculpting with paper. In the early 90’s she became a video artist and learned about cameras, filming, and post-production.

Much of her artwork focused on feminist, environmental and community issues as well as advocacy for people with disabilities, marginalized people, and social justice in general. Her artwork can be found in the Canada Council Art Bank, NS Art Bank, AGNS, MSVU Gallery, Acadia University Gallery, and in private collections.

In the 2000’s she developed an interest in comics, and created “Superma!”. Her cartoon alter ego was a superhero activist, in the form of an older bespectacled woman. These comics were featured in Halifax publication Street Feat, and can be seen on her website: https://supermacomicstrip.wordpress.com

She was a teacher and firmly believed that everyone could make art. She taught children and adults in New Ross, and throughout NS. At NSCAD she taught continuing education classes to adults and teens.

In later life, Marie enjoyed a new role as a face painter for children and volunteered for events like Halifax Pride. The city was made more beautiful by her window paintings and murals.

Marie was involved with CARFAC, CFAT, AGNS, The Writers Federation of NS, VANS, AFCOOP, Nova Scotia Arts Council, and Canada Council. She also volunteered with the Ecology Action Centre. One of her last projects was to create an old growth forest installation at the centre for Nocturne.

Marie loved her adopted home of Nova Scotia, her view of the harbour for the last 34 years, and especially the people.

She considered herself an introvert, but she nurtured many friendships. In all of her communities, the thing that has been said over and over is that if something needed doing, and especially if someone needed help - she was there.

Marie’s family wishes to thank all of her friends and neighbours who checked in, brought food, cleaned up, drove to appointments, and made her smile.

Thank you to her alternative health care providers for improving her quality of life. Thank you as well to her palliative care team; you were so kind. There will never be enough thank yous for Judith, her dear friend of 30+ years, who took on so much while we were far away and feeling helpless.

A celebration of life will be held at a later date once current restrictions ease.

In lieu of flowers please consider a donation to the Ecology Action Centre. https://ecologyaction.ca/

Dear Julia and Family, I met Marie at CFAT and spoke with her more when she was making her film of her Mother's Alzheimer's journey. Marie was, to me, a gentle person who 'saw' those she encountered. I am sorry for your loss and know her creations, dedication and commitment will be remembered with love.
- Theresa Thomas
My deepest sympathy to all of you. I can remember how Marie would always light up whenever she would talk of you Julia. Marie sparkled love to all those lucky to know her but there was nothing that could make her beautiful eyes twinkle more than when she was talking about you. I feel so lucky to have know Supermarie. Her superpowers were love and kindness . My deepest sympathies to you and your family. I will make beautiful drawings today with the happiest and brightest colours in her honour. With much love xoxo Jennifer
- Jennifer Tilley
I am so sorry to heart this news. My condolences to Marie's family and her other loved ones and friends. My most recent and enduring memory of Marie is her dedicated organizing of Muriel Duckworth's papers in preparation for archiving. In the last decade of Muriel's life, Marie was a frequent presence quietly at work in Muriel's den while I and others came and went. Hers was a gift to Muriel but also to posterity. I'm not sure she was every properly thanked. And I regret that. May she rest in peace. She certainly worked hard for peace in her life.
- Pat Kipping
I was grateful to have Marie coordinating travelling exhibitions and associated programs for the NS Museum's Cultural History section in the last days of the National program. My sympathies go to all those who knew her better than I, and especially to Judith.
- Sheila Stevenson
I am so sorry to hear of Marie's passing. She was always a bright light. I so enjoyed seeing her again at the Centennial pool where we were all trying to keep fit. She was so youthful in her outlook. My condolences to her family.
- Marijke Simons
To Julia and Marie's extended family of friends, I am writing to express my shock and sympathy to all of you who loved and knew Marie. She was my good neighbour on Fairbanks Street (actually, we bought the house from her). I also had the pleasure, as a judge, of reading her poetry submission, "Mother" for the Writers' Federation of Nova Scotia competition. Among the 1000 entries, hers moved the two other judges and I and we placed it in the top three. More recently, when I was experiencing a lonely Thanksgiving in Halifax about which I wrote a piece on social media, a mutual friend of Marie's and mine, reached out and asked Marie if I can join her group for the occasion. Of course, she said yes. Marie was a yes treasure. As the comments about her here and in the paper express, she was an additive soul. She said yes to life, to her creative spark, to the arts in general and I'm sure to more good deeds to more people than we could ever count. Whenever I saw her, we would chat a moment and I learned of some of her endeavours. I didn't know she was ill. I am very sorry for your personal loss and the loss to the city and province of a very gifted and compassionate artist. Would there were more like her.
- Joanne Light
Dear Julia and family, my most sincere condolences on Marie's passing. Although we lost touch over the past few years, she (and YOU) was a very special friend of my family, and I cherish the many days we spent together over the years. Her 'sewing hands' art work hangs where I can see it daily. Your children will miss out on a lot of fun with Marie, but I know you will keep her memory vibrant and alive for them. Take care, and be safe! Gloria Hubley
- Gloria Hubley
Dear Julia and family, we were saddened to hear of Marie's passing. She was a treasure. We were fortunate to be given one of her beautiful pictures of the "Geese". Marie was truly a very special human being and will be missed. Sending you Love at this time. Donna Bernard and Family.
- Donna Bernard
Dear Julia and family. Marie was a lovely, thoughtful and kind woman. I knew her because of all the tireless work she did for our harbour community. Marie was a great leader and caring steward of the earth. Myself and my family are most grateful to her. Take care, Mary Lynk
- Mary Lynk
I'm very sorry to hear about Marie's passing. Marie was the lifeblood of the Harbourview Resident's Association for years. She was one of those people who just went about quietly making her community a better place. She and I had a lot of lovely chats over the last 8 years. She will be missed.
- Sam Austin
Condolences!
- Kathryn Graves
Dear Julia and family So sorry to learn of your mothers passing. Marie will be missed by all who knew her. She had a great passion for people and knowledge and always formed her own opinions. I will always cherish her water colour of of the black sheep and still maintain a few in my flock today. Sincere condolences Gerald Keddy
- Gerald Keddy