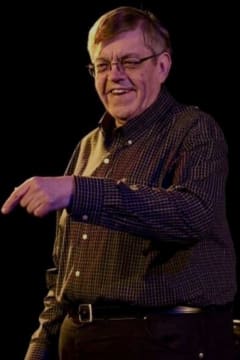 They don't make 'em like Rod any more. I will miss his sense of humour and his great skill at magic, but most of all I will miss his kindness.
- Doug Cuff
Knew Rod from our days at the VG. Always a happy go lucky attitude, and there was no one more interesting and fun to talk with than Rod. Just one of those people that you genuinely liked to run into every now and then. So sorry to hear of his passing.
- Kevin Chapman
Rob was a friend for more years than I can remember.He was a tireless worker in all my campaigns and an equally tireless volunteer for Libéral events for more than forty years.His good humor, and friendship will stay with me forever.He will be sorely missed. Mary Clancy
- Mary Clancy
Rod was a classmate at St Pat's and then at SMU. We hung out often in those days, with Fred Crooks and some other chaps. I lost track of Rod but feel sad to learn that he's passed on; gone too soon old friend!
- Dominic Boyd
Met Rod back in the early nineties through his interest in the local music scene. Very entertaining and quick witted, he always added to the evening. Rest In Peace Rod. Bill and Bev Sampson
- Beverley Sampson
Rod was a true gentleman . I first met him in the early 1970's at SMU while taking Political Science . This was a true love for him.Politics was like a double overtime hockey game for Rod. He always enjoyed being involved. He was a class individual . RIP Rod!
- Alex Joseph
Met Rod while at Saint Mary's both in Commerce studies and at Student Union activity. Dry wit and interesting magic. Will light a candle at Saint Patrick's to honour his Catholic faith. Blair Beed, Halifax
- Blair Beed
I will never forget Rod. He'd regale us and entertain us at Toastmasters and his intelligence was obvious. They say you live forever as long as people remember you. Live on, Rod. Live on.
- Rose Poirier
Rod left a mark on everyone he met. In his work with the charitable organization, where we were co-workers, he could always make us laugh at the sillliest things. I and others missed his wit and sense of humour when he left us. He was always a gentleman, and we always saw him in his suit and tie. May he rest in eternal peace, entertaining the angels with his wit and charm, no doubt still in a suit and tie. Rest in peace, dear Rod.
- Nancy Mailman
Rod was one of a kind and he moved in many circles. Rod's obituary author captured Rod's personality perfectly. He was a very good person and will be missed.
- David Green
Rod was a great friend and an amazing supporter of the Conjurers' Court Magic Club. He shared his many talents, performing, teaching, and made us all better entertainers. I miss his sense of humour and his ability to light up a room by nearly entering it. We have all lost a favourite "family" member. R.I.P. Rod.
- Greg Gidney
Rod was one in a million. Having first met him in the 70s, I consider him a lifelong friend. My memories of his passions go from photography, to racquetball, to juggling, to water skiing, to supporting local pubs and musicians and then for the last many years to magic. Always a tactician, he took all of his interests seriously... Including friendship. I will miss Rod And hope he's sitting down now arguing politics with brother Paul.
- Glenn