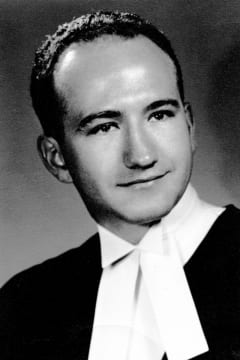 Roy grew up in the Woodside area of Dartmouth. Following graduation from Greenvale School in Dartmouth, he attended Dalhousie University, graduating with a Bachelor of Commerce degree (1963) and a Bachelor of Laws degree (1966). In 1966, he and Carolyn were married at Woodside Imperoyal United Church, where they first met.

In 1971, Roy and his family moved to an acerage near Scotch Village, Hants County, where he realized his boyhood dream of owning horses. He learned much about farming, animal husbandry, and heritage breeds from his neighbours and friends, and from tireless research. While living in Hants County, another dream was realized when he began flight training at Greenwood and became a private pilot. He was an active member of the Truro Flying Club for many years.

Roy established a private law practice in Windsor, Nova Scotia, before moving to Halifax in 1979 when he returned to Dalhousie to begin a Masters degree in Business Administration. The following year, the family moved to Sackville, New Brunswick, where he taught at Mount Allison University in the Commerce Department. Oxford, Nova Scotia, became home in 1981 where Roy eventually returned to private practice. He was appointed Queen's Counsel in 1985. Due to ill health, Roy retired in 2000 following which he and Carolyn moved to Halifax.

Roy was a member of Fidelity Lodge No. 119 for forty-six years, was appointed Worshipful Master of his lodge in 1973, and held the position of Grand Superintendant of Works, Grand Lodge of Nova Scotia, from 1977 to 1978. He was also a member of the Scottish Rite and Philae Temple Shrine.

Cremation has taken place, and, by request, no service will be held. Donations in Roy's memory may be made to the Shriners Hospitals for Children - Canada, or a charity of your choice.