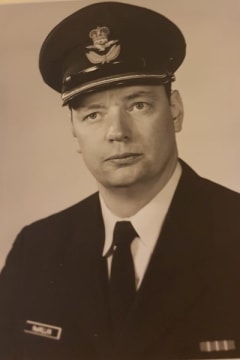 Born in Swampscott Mass. USA, he with his family members came to Nova Scotia in 1936. He was the son of the late Russell and May(Sawyer) MacMillan of Truro. He had a career with the military, joining the RCAF in September 1953 and retired August 1989. He was commissioned from the rank of Sergeant and promoted to the rank of Flying Officer in 1966. In 1974 he was promoted to the rank of Major. He served at various bases across Canada from Alberta to Newfoundland. He also served at RCAF Station(2) Fighter Wing, Grostenquin, France 1961-1964. He became the Senior Staff Officer Atlantic for Air Traffic Control Services Air Group HQ, Halifax from 1976-1979. At the time of his retirement he was employed as a Senior Air Rescue Control Officer at the Rescue Coordination Centre(RCC), Halifax.

Patti, Sorry to hear about your Dad. I'm sure that you and your family have lots of happy memories to help you through this very difficult time. Adell and Dave.
- Adell Thomas
We are sorry to read of Wayne's fathers passing.Our sympathy to Wayne,Janet and family at this time.We know your dad had a wonderful career and the last years were not the easiest and finally is now at peace. Sympathies to your sisters and families!
- Sandra Reddy
Dear Dad: I am missing you already! The years ahead will be empty without you. I had loved that you built a skating rink for me, when I was nine. I learned to play hockey on it. You taught us to ride a bike; to skate; to ski; to swim; and even tried to teach us to water ski ( HA! HA!). You taught us to reach for the best in ourselves . I tried to do that with a diploma and a degree. Honesty, you had valued. Your love of POP and CLASSICAL music, you gave me and Evan that gift. Both Chris and Evan loved your sense of humor and they will deeply miss the walks they had with you. Although, you were a sharp shooter, you didn't like to kill animals that I had always admired about you! I was and always will be proud of you for advancing from a Private to a Major in the Canadian Air Force during Peace Time: although, it was the Cold War. I was proud and still proud of you for helping to save lives , while serving for the Canadian Coast Guard. It will be the little things I will miss, such as, planting vegetable gardens in Chatham, N.B.. My heart does hurt that we didn't resolve all our differences, but maybe once we meet again in Heaven, we can do that. Love you Dad always ...Heather.
- HEATHER OLSEN
Heather , Patricia ,Wayne & Sandra, I am sadden to hear of your father passing. He was a dear friend of my mother and father during the early years. I came to know of your father when we lived in Chatham NB. I have a lot of found memories visiting your grand parents in Truro as well.Dad as I recalled mentioned your father visiting him in Kentville. He to has passed this year. I hope during these time you will all hold your memories close to you hearts. Sincerely, Joan Golden(Moore)
- Joan
Patti-Sincerest condolences on the loss of your father.
- Byron Mullett
Sorry for the loss of Uncle Phil. I remember well many Sunday afternoons with Phil and family. While things could have been better in the later years I will always appreciate that he had a kind word and time to talk when needed. Sorry to see you go Uncle. Hope you are in a better place with friend and family that love you. Bill Mac
- Bill MacMillan